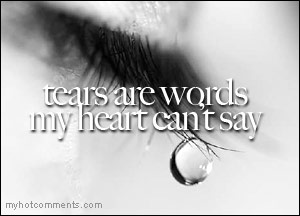 “when it rains it pours”….. well,,,, it has not stopped pouring for about 8 months.
To summarize, the daughter that I raised alone for 20 years, showed up one night, with the police, and her boyfriend after a small argument on the phone the night before and took some belongings and left, with no explanation. I apologized for things that were said on the phone the night before. We have had arguments before that were much worse. Looking back now, I’m not sure she really liked me as a person. I did my best with what I had, worked 2 jobs at times and did nothing but support her. My niece, who I also took in at one point for over a year, in the middle of my divorce, seems to have replaced me. The worst part is not knowing why. About 4 days later, my grandmother passed away suddenly. My daughter was asked at the funeral if she has any remorse for what she did and was told that some things she did were unrepairable. She just shrugged her shoulders. I left the funeral, which I was supposed to do part of the eulogy, but could not bear to see her. It was too soon. For weeks after, all I could think about was ending my life, as I felt God could not have done anything worse then to take that girl out of my life, that I put first, made sacrifices she will never know, and revolved my life around, down to the smallest things. I had someone stay with me 24/7, after calling my parents and telling them goodbye, and i was sorry, but there was no other choice. All this happened in July. My daughter left for college in August, my niece took her. That is something I was looking forward to for almost a year, was taken from me and I cannot ever get back. I tried to email, text, call. Nothing. And I still don’t know why.
I found out recently that my health is failing due to an auto immune disease that has gone untreated for about 4 years because doctors would not listen to what i was saying and kept treating me for depression. Well now, the labs that came back are extremely high, one did not even register. The highest the number could be, indicating a “strong positive” was 60, my number was over 250. Every day, it takes every ounce of strength to do what needs to be done. Every day, since she left, I simply get up and go thru the motions with no feeling at all. It has changed me tremendously as a person. My heart and soul is destroyed. 3 days before she left, we went to her 2 day orientation and everything was absolutely fine.
2 weeks ago, my father was hospitalized. I have lost count how many times in the last year as his health has been failing.
He has Rheumatoid Arthritis ( and auto immune disease, which is what they believe is wrong with me, and also vasculitis with me ), which leaves you extremely immunosuppressed and difficult to fight anything. He has also had 2 heart attacks, and prostate cancer.
We took him to the ER with abdominal pain. This turned into finding out that he also has colon cancer, and leukemia, and the lymph nodes that were biopsied were also malignant. They did surgery for the colon cancer, and while back in his room in ICU, suffered his 3rd heart attack. He simply was not strong enough to endure the surgery. He was on life support, but managed to be weaned from the ventilator. He was then transferred to a skilled nursing floor, however 2 days ago, things started going downhill again and he is now back in ICU. The night he suffered the heart attack and a code was called, I took it upon myself to email my daughter and tell her. I felt this had nothing to do with her and I. No response. She called my niece and the two of them have been visiting him together. That is all he talks about when I visit. He wants reconciliation with my daughter and I, however, there are some things, I simply have not been able to forgive her for yet. I believe my job is on the line for missing 2 weeks of work due to the circumstances with my father. People I thought were friends, I have not heard from in almost a week. All this transpired with my father in the last 2 weeks. He did not know about the Leukemia, till yesterday when he overheard a physician talking to a nurse outside his room. He was not going to be told because all the physicians involved felt he was not mentally or emotionally strong enough to hear this news on top of everything else. I lost my best friend of 3 years, I believe it simply became to much for him to handle, my leaning on him. I have lost trust in almost everyone, so after visiting dad and spending some time with mom, I come home alone. I dont feel comfortable calling anyone and telling them how I feel, but there is just to much that has happened and I dont know where to turn, who to turn to, I feel “lost”, like nobody understands. I’m tired of hearing ‘we are never given anything we cant handle’ and ‘you will get through this’ and ‘you are a strong person’. I feel all those statements are doing nothing but trying to pacify me. My strength is gone. I have never EVER felt so alone in my whole life. Looking at the big picture in the last 8 months, I believe I’ve had my fill of going to hell and back, and feel i’m fighting this battle alone. Well I cant fight anymore. I have nothing left to fight with.

Actively choosing to have children is an iniquitous...

I miss my life

But you need to know you aren’t alone concerning you’re daughter, at least.

Visit this online group?
http://www.dailystrength.org/groups/parents-of-estranged-adult-children.
There are many there who share your pain over your child!

I’m sorry for all you’re experiencing. I call it “the perfect storm….and, yes, its alot for any one person to face alone!

im here if you need me and i understand so i better hear from you!!!