Puppet- noun :: A puppet is an inanimate object, or representational figure animated or, manipulated by a puppeteer. It is usually {{but by no means always}} a depiction of a human character, and is used in puppetry, a play or a presentation that is a very ancient form of theatre. The puppet undergoes a process of transformation through being animated, and is normally manipulated by at least one puppeteer. 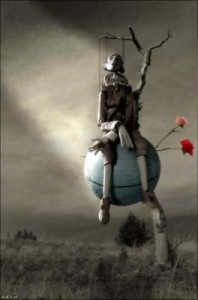 Imagine what it’s like being a puppet. Someone’s always controlling every move you make, everything you do. Day in, and day out. Isn’t that how it is, in today’s society, though? We’re basically all puppets. It’s like we no longer have a, working, mind of our own. So we listen to what the media thinks is ‘in’, or ‘cool’. We buy their Gucci, Prada, and Vera Wang merchandise. And for what? It’s not like you can use an $8,000 purse as an everyday item. It’s understandable, to a degree, why people indulge in such things. I mean, who doesn’t like nice things, once in a while? But all the frickin’ time? And you wonder why you’re thousands of dollars in debt? Seriously? Maybe this is what life as a puppet is like? Hanging on every word the media says. Begging for more material, so you can be part of the ‘in’ crowd. I thought dogs were supposed to beg, and whine…Not human beings. Well, mammals that claim to be human.

What is life like, living everyday as a puppet? An exact copy, a clone, of somebody – something – else? I can tell you one thing, that I know from personal experience:: It’s hell. A pure, living, breathing, hell. And still, here we are. Being controlled by unseens forces.

I don’t know about all of you, but I am sick of it. I’m not a puppet, and I do not have thread potruding from my limbs. I’ve let people control my every move, for too long.

Idk how much longer i can hang on

I miss my beautiful Lillie.

Shut Up And Be Normal

In other words, what would life be like if this crap didn’t exist: better or worse? if it stopped suddenly today then WAY worse. (robbers, kidnappers, rapist etc. free to do what they wanted, you heard it before)

I was just making an estimate, I have no clue how long where supposed to work til retirement.

wow, i’m sorry about that.

@mychoice:
sorry…autistic..somtimes i take te match for serius…that is one of the things killing me in real life 2…

@Sander Jansen: it’s ok, sorry to hear that though.