My costume in blood 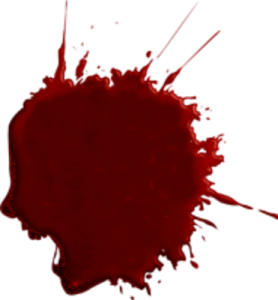 A few years ago, I was visiting some friends for a small party, and we were supposed to make our own original costumes.

I don’t usually “do” parties, and I’m not all that fond of costumes.  Plus, this also happened at a time when I was in a seriously dark place, kind of like I am right now.

After much thought, I decided my costume would be a personification of an abstract concept.

I decided on “Sesquipedalian Exsanguination”.

So I took a big piece of white cardboard and wrote lots of big long multi-syllabic words on it… in my own blood.

I was into fountain pens at the time, and was able to dip the pen into the puddle of blood just like they did with quill pens in inkpots a few centuries ago.  Whenever it clotted up too much to use, I’d just add more to the puddle.

I wore it around my neck like one of those wearable-sandwich-signs.

It was the most creative costume there, and it was quite an experience when I inevitably had to explain it to people.
You can imagine the look on their faces when they realized that all these long red words were not written in watercolors after all.

Proof that I am a lovable nerd with disturbing issues crammed into the dark corners.

Is Weed any Good?

The world must be run by psychopaths

That’s so cool. I knew my nerdness was no match for yours. I had no idea my darkness could be over shadowed by yours… I guess musically you trump me too. Dammit, youre flaunting all your talent in my face… joking… but you’re pretty awesome though..

(*presses hands together and bows*)

Thank you!
It’s one of those things you just can’t quite explain to the general population.
Or family members.

Nobody knows about it except you guys here, and the friends that were there.
(And, I guess, whoever they decide to tell about it. 😉 )

Exactly!
I could tell you, but I’d have to kill you.

In fact, I guess I already HAVE told you, which means….

LOL. I *totally* get the fountain pen and writing in your own blood bit. It’s crossed my mind but I had always thought it required to much blood- can’t pass out before you’re done with the piece. I was REALLY into fountain pens at one point too.

The clotting was definitely a nuisance.
I could barely get a couple words done before it was too thick to coat the pen anymore.

And of course, when I was done I had to clean the pen thoroughly or it would’ve dried up into a big glop.

Ordinarily I prefer fine-tip nibs, but for this project a broad nib pen worked best.

I can’t believe I’m talking about it like Martha Stewart doing a craft show. 🙂

Hmm, or maybe diluting it with water would make it less clumpy? Though, full on 100% blood is cooler 😛

Hehee, that’s what SP is for 😛

All us weirdos and wackos and somewhat deranged can speak freely without rocks get through at us, or taken with shackles to somewhere.

Full-on blood IS cooler, plus diluting it would make the color too pale to show up.

I remember I could tell when it started clotting up because the plasma (clear white fluid) was all that would show up, and there was no red at all.

Additional disappointment: Eventually dried blood turns to a rusty brown-red shade, instead of the brilliant danger-red we think of. So by the time of the party, not all the words were as bright as I would have liked.

When you said it was real blood, I at first thought the picture in the post was what it was (before I finished reading). Now THAT would be insane. Requires w a y too much blood to do.

I love the picture because it’s a combination of a blood splash and a frustrated scream.

Hmm, makes me think of Rorschach s ink blot test all in blood…

Haha, you’d be the Martha Stewart of blood art 😛

Be glad it’s not a cooking show! :O

Lol, you can be besties with Hannibal. He can give you some good pointers.

And I’ve always wondered if we could taste the difference between different blood types? Not that I’m a vampire (and this was way before vampires were “cool” or a thing) but I’ve always wanted to try my ex’s blood- both refused to let me bite them- understandably. Talk about weird/creepy/misunderstood. THAT is something I can NEVER tell the outside world.

I really am curious though. Can a human taste / tell the difference between different blood types? The answer has adjusts been a “no” bc no one’s ever tried it. or at least scientifically. I’ve a very sensitive sense of taste. Other Animals like cats and dogs can tell. They can even smell disease. Are humans the only creatures that are stupid and can’t tell?

I personally wouldn’t ever taste a person’s blood, so I’ll probably never find out.

I would guess that the differences aren’t perceptible by taste, just because the basic “recipe” of blood is still the same.

You can taste the iron in the blood. So maybe an anemic person’s blood may be perceptible. And no, I. Wouldn’t just taste anyone’s blood. To dangerous these days. I asked my 2 ex s bc I knew they wouldn’t have anything.

I mean I’ve tasted my own blood before (once, when I was cutting and morbidly curious). Tasted kind of gross honestly, the consistency was somehow disturbing. can’t imagine talking about this anywhere else haha

I’ve never purposely cut myself to “drink” blood. Every once in a while I Would accidentally bite my lip or something and there was blood. so what do you do? You suck on it. And one of those times, I thought “hmm, I wonder if I could tell the difference between blood types.”

The only times I accidentally taste my own blood is if:
(1) I accidentally bite my tongue when I’m chewing food (OUCH!)
(2) I have an extra-bad nosebleed and I can taste it at the back of my throat. (ACccghh.)

Ooooh, imagine if you showed up to that party looking like Carrie? Hee hee. Guess you’d have to use fake blood. Or ketchup. THAT would totally turn heads.

I love ketchup, but after it sits around for awhile it kinda starts to stink…
I’d be repelling people on multiple levels. 🙂

Plus there would be no place to sit without leaving red stains.
People would look in horror at the place where I sat, and I’d have to reassure them…

Them: OMG. There’s blood on your seat… Look, there’s—

Me: Noooo, no, that’s not what you think. It’s ketchup. I’m drenched in ketchup.

Them: HOW IS THAT REASSURING?

This made me laugh a little 😛

There’s fake / costume blood and guts that you can use. Has no smell and won’t smear everywhere like ketchup. I went to a zombie fashion show once and the stuff they use is pretty darn cool. Some of the artists were soooo good. The blood and guts look pretty real. It is sticky tough. Felt like sticky silicone lol

I guess then the advantage to using REAL blood is that it isn’t sticky when it dries.

The other advantage being the expressions on people’s faces when they realize it’s not fake. 😮

It could also make for an interesting tombstone: “Here Lies Cordless, After Making One Too Many Costumes”.

It dries darker where it’s thicker, and lighter where the layer is thinner.
A thick drop can look almost black when dried.

Thank you!
I liked it because it was easy to put on and take off, it didn’t interfere with sitting down and resting, and it didn’t cost a bunch of money.

It’s not for the squeamish, but hey, neither is life in general.

I am squeamish, but not really when it comes to blood. Blood is just… blood. Although i do not like seeing human organs or the body its not squeamish i just think its disgusting lol

people try to hide dead people etc from others, its silly, one day someone is going to see someone die or someone dying… why hide it? Dying is part of the ‘lifecycle’. Its ok to feel shock over someone you care about. No i don’t like seeing dead people. But i don’t think it should be hidden. Prolonging the inevitable there 😛
sorry i go on tangent

Hey Cordless, you got stones! Awesome!

If you could get a hold of a tube they use to draw blood some of those have an anticoagulant in them. Would keep it liquid for a very long time. I think the purple top ones have it, not the ones with gel at the bottom, just a small coat of powder.