Home General What i did to my gun not too long ago. would you had done the same?
Report Post
General

What i did to my gun not too long ago. would you had done the same? 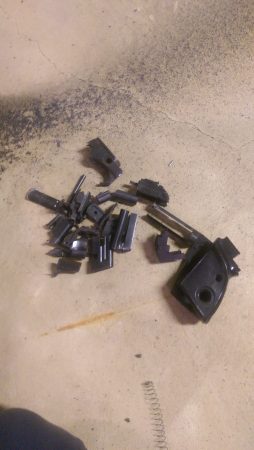 this was my gun that I was mentioning about in some of my comments/replys to people on the topic including member CAUSE OF DEATH: SUICIDE. this is the very same gun for the last 4 years that I have been contemplating to shoot myself with many many times I have gone on bridges or into the woods while pointing it at my head but I just couldn’t seem to pull the trigger and a few times I did but while my head was moved away. Originally the gun belonged to my father. my father bought this gun around the time when I was a baby my dad passed when I was 17 like a lot of you know about and I found this gun 2 years later when I was cleaning my dad’s shop. The machine that I use to destroy my gun in the picture was a Bosch metal cut off saw

The reason I destroyed this gun was

because my mother eventually learned that I had my father’s gun and she was actually pretty cool about it as long as I kept it locked up and she knew how respectful and protective I am with the family cuz we’ve had people break into our house a few times before so out of respect my mother and so she wouldn’t regret not making an issue for me owning that gun and out of respect that it originally belonged to my dad I didn’t want to use my own father’s gun to take my own life.

but at the same time I’m just kind of regretting it because I am much much more stronger and more mature and older to realize where my life is and how my family truly is and what they always thought of me. But you know what it’s all good I already found a different method that’ll do just what I hope it can do I just wanted to share this story cuz I’ve seen some people talk about wishing they owned a gun so it’s not just so easy I’ve had this thing pointed at me countless times I can’t even give a number to be honest I don’t even consider those as even attempts

a reason to die…

Meds and alcohol round 3

(re posted) my attempted suicide story

Well, its probably a good idea to have destroyed it as you did. While yes, you’re more mature as you describe, should you have had a moment of weakness and carried through using it, the shear emotional impact burdened by your mother would have been significant.

And yes, I probably would have done the same to it.

Hey Mark I honestly wasn’t expecting a reply I appreciate your reply and the fact that you agree with me on it even though I regret it I did it for the best. better a photo of a sliced up weapon then a photo of a functioning weapon itself you know what I mean. even though my family hurt me even though they don’t appreciate me or like me anymore because I can’t provide for them like the way I used to be able to or the way I did. Any how this was still not the way that I wanted to go definitely not by the weapon that belonged to my father that wouldn’t be fair not to him nor my greedy mother.