Please beloved, think of your family 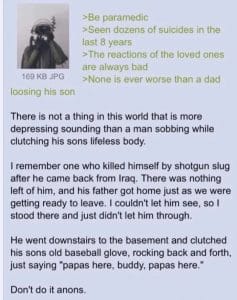 I found it here, and found some replies which I think are worth sharing: https://9gag.com/gag/aDDxXxx?ref=android

“I was in a very dark place few years ago and I was seriously considering to kill myself. It was around the time the Netflix series, 13 Reasons Why came out. There is a scene in it when Hannah’s parents find her dead body and it opened my eyes. I imagined my Dad finding my body and I realised I could never put him through that. I’m not saying I don’t have suicidal thoughts anymore, but since then, every time I think about killing myself, I remember that scene and I picture my Dad’s reaction.
The ironic thing is that there was a petition to ban that series from Netflix, because of the very same scene that quite possibly saved my life. Go figure!”

“My friend little brother do that, because his father is strict but loving, one night after an argument with his GF, he is drunk and get home late. So he is getting scolded by his father, getting angrier, locked himself, slashed his wrist and died

My friend is forever changed, everytime he sees people hanging together, he just stare at them with blank eyes, all his smile is forced
His mother died a year later, from 80kg lady to 40kg lady when she died
And the father stop going outside anymore, just sit silently and sobbing day after day
A family broken forever because a suicide 🙁 ”

As the saying goes, suicide doesn’t remove the pain, but rather transfers it to one’s relatives.

I don’t have a family

Exactly. A lot of people who end their lives don’t have any family.

You’re not wrong. I think many of those who commit have highly negative relationships with relatives, so either don’t think they’ll care, or are happy to pass on the pain.

On the other side of the ledger, there’s also the burden that continuing to live places on one’s relatives, which is something I consider for myself. It’s taken huge amounts of support to keep me alive, which could have been used to make them happier in other ways. All the time, money, and stress could have made them so much more fulfilled if I didn’t exist.

Many who commit are also not in a rational enough state of mind to consider the effects on those close to them, or are in a state of denial about that. And I think if you get desperate enough, you’ll do anything to stop the pain, even if it means passing it on to others that you love. It stops being a rational consideration, and becomes a more primal urge to end it.

Even at a lower level of suffering in my own case, it’s very hard to reconcile yourself to decades of depression, despair, isolation & pain, if that’s what’s required to protect those you love from similar pain. Every morning I wake up wondering why I’m not ending it, wrestling with the emptiness that is my life. Every night I struggle to fall asleep as the loneliness consumes me. It’s very hard to maintain your care for the feelings of others when you yourself will never be ok.

So you look for an out, and if your suffering seems irresolvable, the only out is suicide.

But you’re not wrong, and I think suicidal people should be (gently) reminded of the pain suicide can cause, when they’re in a rational enough state to consider it.

Hi thehusk, I agree with everything you wrote, how the pain can be unbearable, how the depression keeps going. I do believe however that we are loved, that we are cared for. It may sound simplistic, but if we are fed, to the very least we’re loved, and desired. Even if people sometimes say things they don’t mean, I have endless hope and feel love and compassion, even though I’m shaken with doubts and feel a stagnation of duty. You are loved, husk, if I could transmit a hug and soothing.. ???