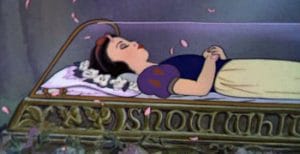 Snow White was portrayed as peaceful; though death is not peaceful at all. If this were real she would be a corpse.

Society has idealized death so much that it has become common for most of us to see it as a way out imagining an end to our own pain and suffering by form of stoping. What a burden to feel like we must take it upon ourselves to end our lives- it is dreadfully sad. Part of the problem is that society paints picture of death as “pretty and/or infinity”. For me, I believed in religion so much that I got caught up in a slippery slope. I was trapped by letting others dictate my way of life and define who I am. Religion told me that dying is good if it’s for others, and convinced me there was a “reward waiting in heaven” … I say, I’d rather enjoy rewards on earth. I believe it would be more plentiful to enjoy experiences on earth than in a distant unknown galaxy where I don’t even know what would become of me.
As a survivor, what troubles me is not how I let things get to my head but rather how I gathered misconstrued (false) facts that added up to my accepting opting out of this world. Luckily for me, I wound up in an urgent care facility after acting upon my crisis urges. All the pain I had done to myself had demolished my future; cooped me up like a weakened worm in a cocoon, too sick to become a butterfly: cold, shivering, and split. Self harm is agony and you will not find peace. What it all boils down to is to be able to differ the ideologies of death and the harsh reality that death is not “pretty/infinite”. The wrongness of this world cannot define you, thoughts of self harm are valid and must be talked about because death is painful, morbid and should not be the way out. So dear brave souls, If you are contemplating suicide or experience harmful thoughts- Talk to The Suicide Lifeline 1800-273-8255 or 911.
I have found that in time of difficulty watching some mental illness awareness movies helps me. To name just a few, “All the Bright Places”; “The Perks of Being a Wallflower”; “Little Miss Sunshine”, “Words on the Bathroom Walls”. In my perspective, I’d rather stick with what I know to be true than to go down that spiral again. If someone out there cares, include me.