How to live from now on…

When I came back from my adventures, I noticed several things. First, is that my dreams are over. Second, is that I can no longer connect with realities, be it people or environment. Third, is the realization of the harshness of the world we are living in. And lastly, is the realization how powerless my self is.

Realizing the dream world is over, I struggled to return to reality. But I noticed that I have no such reality to return to. Before, Iâ€™ve never even think about the future, I just lived for the moment, believing that one day I would get involved and drowned in extraordinary events, be it war, great disaster, rebellion, or even get abducted by aliens. But as you can see, almost 24 years passed and nothing happened to such extent. Now reality caught up to me and began to sinks in, my dream came to an end.

Then I realized, always living in a dream world, left me with no expectation of the real world. When the time came for me to decide how to live from now on, now that I have to continue living in reality, I just honestly have no idea. I donâ€™t have any work in particular that I want to do, but the worst part is I donâ€™t have any notable skills to survive in the real world, and the only thing keeping me alive was the kindness of my parents. Then even more realizations came to mind, I am only an average joe, I donâ€™t excel in anything, that I amâ€¦.. alone.

My friends have graduated, worked, and engrossed in their own lives, most even leaving this city. Long gone the days that even with my passiveness people would still gather in my messy room, talking about nothing. Now I am truly alone, my feet got heavy everytime I set them on campus, then I stopped coming altogether. 2012 was a year of loneliness, which I was living from my room, hardly ever went outside.

I began to lost all hope, and somehow the only hope left was for the prophesized End of The World in the December. But as you can see, it didnâ€™t happen. Or maybe it did happen in some parallel worlds but to me in this world, it didnâ€™t matter. The fact is the world still goes on and somehow I still have to keep living, but I have lost all ambition, motivation, and desire. I donâ€™t know how to live from now on and I donâ€™t even know what I want to do, and I donâ€™t want to make my family to carry this burden called myself any longer.

I truly want to believe in God since despite the many life threateningÂ  moments I experienced, I still managed to survive, I hope it was divine interference rather than just extreme luck. Why I kept on surviving, do I still have a purpose in this world? Tell me I do, please.

In the end, I think for someone to be happy, is for them to have something to believe in. But I donâ€™t simply believe everything thatâ€™s thrown at me. First I doubt them, then I began to doubt everything, even my existence. Now I donâ€™t believe in anything, and that pains me greatly. I want to disappear.

All the sufferings in the world

After I became an adult, I realized that the world is full of sufferings

true there’s joy as well, but the sufferings are much more severe

in everyone but children I see a shred of suffering

this site for example, has dozens of posts a day, only a small portion of the actual viewer, and I bet very large number of world populations also feel the same, don’t forget the people without internet connection in Africa or such. But in Africa everything is trying to kill everybody, death by suicide is the last concern

For all this sufferings, I wish God would help us all, I want to be saved and I want to save everyone, alas I’m lacking power, thus I wish to God to purify this world, so everyone can live honestly even if they are stripped of of all their labels

Every time i’m about to fall asleep, i would wish that i would never wake again

This is my result of the depression test 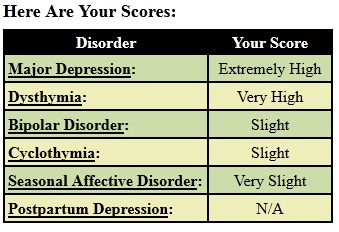 so tired…. living a dull and boring life…

not only that, even after having fun with friends and doing other fun stuffs, the excitement won’t last, only an hour after, keep reverting to my suicidal state

anyone here knows how to hibernate? I want to hibernate and wake up when amazing events started, like war or zombie apocalypse

or anyone knows how to create secondary personality? I want to delegate my boring life to him, and take over when amazing events started, like war or zombie apocalypse

I always have great imagination, i can simulate what’s going to happen in the near future

but what i see is always a dull boring life, of course i also tried challenging and less predictable activities like mountain climbing and ruins exploring, but in the end nothing happened and i went back to my boring life

I always wished i would just kick the bucket during one of my journeys, but to no avail. I have always survived and while it was a refreshing experience, the excitement won’t last even for a day, daily life is just too boring god……..

as much as i wished for a “switch off” button, it would be okay if i only just have a “skip”/”fast forward” button

I’ve experienced them all, school, work, love, friendship, etc. I noticed that many members of this site are young boys and girls usually with a problem of interpersonal relationship, then i need to tell you all, past that, hell is waiting, hell that is called boredom

I hardly have any reason to live anymore, i mean what is considered reason for living?

money? – I’ve saved enough, i wouldn’t need them where i’m going though, never like money so much

love? – it’s nice when it lasts, left her when i was feeling suicidal

friends? – quite many, almost everyday hanging out with them, but they are content with their lives now, they still think i’m weird for worrying about weird stuffs but they don’t leave me

family? – a loving family who believe in me, might as well opt out now before i degrade even more

movie? – keep living because you want to watch a movie that will be released next year? i realized that they will not stop producing movies, not worth as a reason for living

in a sense, it’s a blessed life, but I still feeling suicidal, it’s like i’m a broken human, nothing excites me anymore, no one can read my expression anymore, they said it’s a perfect poker face

I think only a war scale event can make me feel alive now, if it’s not going to happen, might as well kill myself now, before my mind is breaking

The meaning of life

People says that war is cruel and everyone deserves peace

but i say otherwise

during the warring era, people fights for their lives everyday, people discerns enemies and allies. While life is fragile it’s also shining brightly.

nowadays, most of the world is in the state of perpetual peace. The fighting still continues, but only within every human, we can no longer identify enemies and allies, most jobs no longer requires physical prowess since hard labor are being done by machines.

Humans keep getting weaker everyday, rather than evolving their physical body, they keep manufacturing things to lessen their burdens, while using tools is not a bad thing but the usage has been astronomical, i’m sure human dependency to tools and medicines will be the downfall of mankind one day.

The meaning of life keep diminishing everyday. This peaceful era destroying the mind of the people. I bet no one actually cares for nationalism anymore. This peace represses most human emotions, instincts, and natures. We are being turned to either robots or zombies, forced to be working as cogwheel of society. The peace is destroying humanity, turning us into mindless freaks that only care about money.

A chance has presented itself

this maybe my last chance to say goodbye to the world

I guess I’ll opt out first 😀

See you guys when I see you again

Death is not the end?

For quite some time now I’ve been thinking to die

My friends and families expect a lot of me, and they said I have the abilities to carve a bright future

but even so I don’t feel like doing anything, frankly said, death piques my interest

emotions, including fear, I bury them immediately when they emerge, but death is different, something I feel toward it, it’s not fear, not joy, something different altogether

mmm, no, maybe it’s really fear after all, I’m afraid of death

I’m afraid to obtain happiness, knowing that in split second I might die from anything anywhere anyway

Maybe I will be successful at work or romance, just have the day after being killed in a car accident, or murdered by random people

It’s stopping me from anything I’m trying to do but hey, people always say that people can go kick the bucket anytime so they should just live their fullest

makes sense, but why the agnostic me still alive today when those children in poor countries dying just for the hell of it?

what is death really? the end of all? or a gate to heaven and/or hell?

I’m really curios, I really want to try die once, but I don’t wanna do suicide, I wanna be killed, I’ve been putting myself in a lot of dangerous situations hoping to get killed naturally, but somehow the situation failed to kill me or I chickened out

this has been bugging me for forever, I really want to solve this mystery called death even if it’s the last thing I do, I’m sure then all my unrest will be cleared