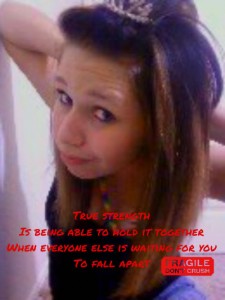 I don’t wanna wake up in the morning and look in the mirror to find another revolting reflection.

I dont want to have to change seveen times because i look unattractive in over half of my cloths.

I dont wanna be afraid to wear a bikini anymore.

I dont wanna worry about if i rain out of make up because if i didnt wear it i’d look disgusting.

I dont wanna constantly feel the need to look in the mirror not out of vain, but to make sure i look decent and not ugly like i know i really am.

I dont wanna question if i should eat that day or not because it might help me drop a pound.

I want to wake up and feel confident that im pretty. 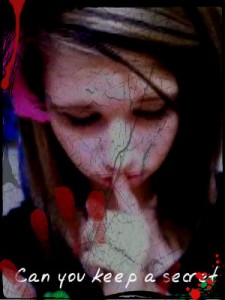 Theres a girl … she doesnt know how to handle things… everythings spirling out of control… sometimes she can convince herself that shes not really alive… maybe shes in a nightmare.. and she just cant wake up..?

You’d never guess her secretÂ  if you knew here.. she hides it so well… she seems so happy… do you want to know her secret..? She cuts herself. She doesnt know why… and she doesnt understand why she resolved to it.. but one thing she knows is SHE CANT STOP.. but why ..?

When she feels out of control.. overwelmed with emotion.. cutting helps helps her calm down and be able to think… but at the same time .. when she feels so numb.. empty.. cutting helps her feel alive… even if only for a moment… she didnt have an easy childhood.. there was always aruging.. giving.. never recieving and she never felt good enough.. important.. enough… who would care if she cut..? Everyones better off without me.. thats what she told herself day after day.. she was everything she despised.. sometimes she would sit in her room crying.. a razor blade in her hand.. at the ready.. hearing laughter from down stairs she never felt more ALONE.. and yet no one noticed … she just wanted a hug.. someone to lover her.. and tell her everythings okay.. and that they cared.. so why didnt they…? Sometimes she thought about dieing just taking a load of pills.. and ending everything.. whou would care after all.. right.

She was only 11.. a lonely and misunderstood girl by the time she was 13.. her body was covered in scars and cuts she just wanted to be LOVED .. was that to much to ask?? She always tried to be everyones idea of perfect.. she complety lost who she was.. she liedÂ  to her friends and faimaly just so she wouldnt have to see the tears of dissapointment in their eyes.. she wanted someone to understand … to care…. but it didnt happen.

Who knows if anyone ever cared for her?

Who knows if she can ever escape from cutting?

One day you might relise you’ve known her all along the bubbly girl who tells you her cat scratched her.. could be hiding it all under a smile..

Do you want to know her secret? she cuts herself so help her.. thats all she wants.. NEEDS can you guess who she is?

Today, well it was a better day then yesterday.

I stayed home from school ‘cuz I woke up depressed. But, spending the day doing nothing didnt make me feel any better.
Im just as lonely and sad as I was yesterday. Since i didnt do anything I thought alot. And I realized my friends really dont like me. I mean in high school you dont really make that many new friends, you just drop a few old ones, and keep a few old ones..
And I realized I need a new friend.. So, anybody reading this (if anyone is still actually reading my boring post)

They said it would go away with time…

I guess I’ll start off with a quick synopsis of who I am before I start explaining what is that’s making me feel suicidal.Â  To start my name is Luke, I’m 19 and I live in St. Louis Missouri, have my whole life.Â  I graduated highschool a little over a year ago and I’m currently going to ITT Tech.Â  I’m overall a middle of the road kinda guy on almost everything.Â  B average student, somewhat attractive, funny at times, etc.Â  Just normal.

Anyway as of late I’ve been feeling pretty bad.Â  Actually I haven’t felt this bad in a long time.Â  For some reason I’ve been thinking a lot about my life I had back in high school.Â  For me, high school was a pretty good time, it had it’s ups and downs but overall it was a good 4 years.Â  After I graduated high school all my friends moved away for college.Â  I keep in touch from time to time with some of them but I haven’t seen any of them since I graduated.Â  I’ve made some friends in college but not as many as I had in high school.Â  One thing that keeps bugging me day in and day out is this girl Kayla that I had a crush on in high school.Â  My school was pretty small and almost everyone knew eachother.Â  I knew Kayla and Kayla knew me.Â  We weren’t best friends but we were in general friends.Â  We had a few classes together during high school and one thing I remember is I could always make her laugh.Â  I liked Kayla a lot and I still do. Â  The thing is I never made a move to ask her out.Â  It’s been bugging me ever since I graduated.Â  I knew she was seeing someone and that kept me from pushing a relationship with her, but I think at some point in time I should’ve done something.Â  I mean, she wasn’t seeing someone the entire time we knew eachother.Â  The last time I saw her was after graduation in the lobby of our school auditorium and I hugged her goodbye.Â  That moment just loops over in my head all the time.Â  I think about her non stop and feel like I’m kidding myself at times that I could even be with her.Â  I’m still friends with her in some sense but I feel that any chance I had in seeing her has gone out the window.Â  I’ve wanted to send her a message via e-mail telling her how I feel about her but I know the answer I get back wont be what I want.Â  I just want nothing more than to be with her right now, and knowing that I cant is killing me inside everyday that passes.

if we had never met

right now i’m seventeen, theres been so many changes and events in my life leading to my current state tht i doubt i’ll write all of them here, or remember them all, still, there are some main reasons i have never been able to overcome.

So, what happenedâ€¦ Thursday night, I downed a bottle of medicine, because someone three fries short of a happy meal wrote on a website that â€œliquid is absorbed faster than pills.â€ So I thoughtâ€¦ I die faster, and I fall asleep before I suffer. So much for that ideaâ€¦

Obviously, my plan didnâ€™t work. I didnâ€™t have to go to the hospital or anything, though. I downed it, and my heart was pounding, to the point that I just knew I was going to die. So I laid down in bed, pulled the covers over my head, turned on Relient K, and tried to go to sleep. Yes, I did go to sleep, and I woke up feeling likeâ€¦ Iâ€™ve never been drunk, but Iâ€™m sure the feeling is very similar.

Something very interesting happened the next day, though; a girl in my Psychology class, whom I was once best friends with in elementary school, once shared friendship necklaces with me and another girl. Shelby moved, but BJ, from my class, we just never saw eye-to-eye after third grade. Sitting in the gym that day, since our class has went to help clean it up from the yearly exams,Â I hear BJ say to another girl, but to me as well, â€œMe and Jessie used to be BFFs in grade school.â€ And she asked me if I still had my necklace. I remember, it was a purple seal, with what I think was a heart on its nose that it was balancing. Each said BEST, FRIENDS, and FOREVER. I had FRIENDS, because I was in love with that word when I was little, considering how hard I tried to hold onto it. Shelby had BEST, and BJ had FOREVER. Ironically, I gave her the tail one, because I didnâ€™t figure on her being around very long. This day, she said, â€œI still have that necklace. Do you?â€

I didnâ€™t. I told her I did, because I was ashamed of myself. How could I be so stupid for having thrown it out? Or maybe lost it? Iâ€™m not sure what happened to it. Either way, I knew one of two things had happened. Either it had gotten thrown into some garbage that survived through all the years, or maybe there was a part of our time together that she wanted to hold onto, to remember. And when youâ€™re sitting there, thinking how stupid you are that you canâ€™t even kill yourself right, and what method youâ€™re going to choose this night to do it right, you start to pray that it was the later reason. I was sitting there, literally thinking about how to kill myself, and someone gives the audacity to think that maybe someone cared. As Iâ€™ve mentioned before, I stick to my notebook at school. When we got back to the room, I wrote, â€œI almost wonder if that was a sign from Godâ€¦â€

So, I lived, with one more memory to erase from my mind of a failed attempt at my life. The question now isâ€¦ do I try to go continue on, going by what may or may not have been a sign that I need to? Or do I quit now, while Iâ€™m still not afraid to die?