An amazing song from the movie “Donnie Darko”. I find it very relatable. I even learned to play it on a piano.

All around me are familiar faces
Worn out places, worn out faces
Bright and early for the daily races
Going nowhere, going nowhere

Their tears are filling up their glasses
No expression, no expression
Hide my head I wanna drown my sorrow
No tomorrow, no tomorrow

1/6/2015 5 comments
0 Email
I Will SurviveSuicidal Survivors

Music is my sole comfort when I’m suicidal.

I don’t know when I started becoming depressed, but I do remember putting a knife to my stomach and pressing hard when I was 8, so it’s possible that I’ve been depressed since then.

For years, I’ve tried to deal with the way I’ve been raised and the way I actually am. There is no medium, for the two are extremes and being caught in the middle makes me feel stressed. I have never had someone tell me how to handle my emotions, except to just be happy or ignore them. I have never been told how to handle stress, except that I have no right to be stressed.

My family is unsympathetic and unaccepting, when all I want is their sympathy and acceptance.

So I turned to music. Of course, they don’t approve of the music I listen to. It doesn’t matter to me (but nothing matters that much to me anymore) because it gets me through one more second of suffering. I put on a happy face and put on my ipod and pretend like I’m killing myself. I daydream of death, be it my own or someone else’s who is frustrating me.

Sometimes I feel like there is no hope, but I listen to music and for 3-5 minutes, I have something keeping my head above water. When I read Jonathan Davis’s quote, “We get countless emails saying, ‘If it wasn’t for you guys, I would have killed myself.'” I realized I wasn’t alone. Korn did save my life, and I won’t sit here and deny their music can be morbid or violent. However, I feel morbid and violent. Knowing that Jon Davis survived his hardships and is offering his hand to drag me out of the water is all I need to wake up in the morning. 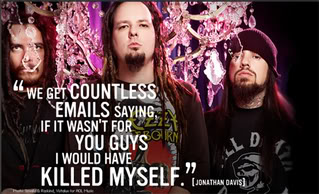 At the moment, I’m listening to Mad World, by Tears for Fears (but sang by Gary Jules) from the Donnie Darko soundtrack. The movie managed to make me more depressed, but I realized that the song actually makes me realize how I feel. Many things depress me at first, but later serve as an inspiration or coping mechanism.

Of course, some nights I pick up a sharp edge, but I sing a song to myself and imagine someone who makes me happy, someone I’d actually live for, and put it down. I don’t want to tell others what to do with their lives, but I think that if you want to get through your depression, you first have to admit you have a problem. If a doctor asks you, admit it. If you need to, go to a counselor. Then, stop yourself and find ways of coping that don’t risk your life. When cutting got to be too dull for me, I turned to fighting and provoking guys to hurt me. I became addicted to adrenaline and that was far more risky than cutting. I actually got two concussions from this but have learned to cope with other things.

Sometimes, it feels good just to let it all out, and I’m glad I found this WP. I would never have gotten through this night safely without it.

Dead in the Water

My dad’s job makes us move around alot and i’ve finally had enough, I can’t take losing all my friends over and over again. I started cutting a while bck, after my grandad ahd died,Â and sme teachers noticed it and put me into counciling which helped for a while but then a teacher who was realli helping me deal with everythink, she wasn’t judging me or anythinkÂ like that but she seems to have forgotten about me and once again I’m left alone with no-oneto talk to no-one to lean on or nothink. I feel as if I’m invissible. My friends talk about me behind my bck, I’m getting constantly bullied and most teachers seem to preety much hate me. I can’t stand being on my own anymore and suicidal thoughts are once again plaguing my mind. I have to cry myself to sleep every night. I’m stuck in this mad world, suffercating by everythink.Â I wana get out!!! xxxxxx