Antidepressants increased the risk compared to placebo of suicidal thinking and behavior (suicidality) in children, adolescents, and young adults in short-term studies of major depressive disorder (MDD) and other psychiatric disorders.

The following symptoms, anxiety, agitation, panic attacks, insomnia, irritability, hostility, aggressiveness, impulsivity, akathisia (psychomotor restlessness), hypomania, and mania, have been reported in adult and pediatric patients being treated with antidepressants for major depressive disorder as well as for other indications, both psychiatric and nonpsychiatric. Although a causal link between the emergence of such symptoms and either the worsening of depression and/or the emergence of suicidal impulses has not been established, there […]

Is This Who I Am? 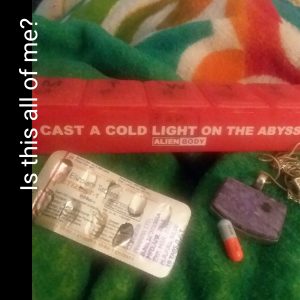 Anyone on here on Prozac was having a talk with my doctor and now he’s recommending changing my anti depressant to Prozac anyone got any experience with it ??

poison in my mouth

I had a mental breakdown last week and added 10x more scars to my body than there needs to be… I am a pessimist but also an optimist in training. But right now i feel like all the bottles in the world of prescription Prozac and Ativan couldnt fix me, i feel broken and lost like the lost things that end up in neverland. I hate these feelings they drive me insane and one day im scared that i might just be. I am only 19 years old but have suffered from depression since grade.9 and anxiety since grade.10, despite being in my 2nd year […]

I wonder why all the doctors and professors I’ve met told me its going to be okay. I mean, they should know better that there is no escape. This is not a passing cold.

That pisses me off. Later, after 6 months of therapy, they tell me the truth. Fucking morons. I knew that from the beginning. It doesn’t matter how much you stuff me with Prozac, it will be there.

I am sick of the pain

And by pain, I mean physical pain.Â  I am sick of hurting all the time.Â  I am sick of not sleeping at night because I get these long, miserable headaches, and the treatment(s) are typically stimulants.Â  I feel nauseous and depressed and I just want to die.

I have PTSD from being ill.Â  I get flashbacks of when I was sickest.Â  I was lying spread-eagled on the floor, unable to move.Â  I could barely breathe.Â  I just lay there and stared at the ceiling, I don’t know for how long.Â  I remember crawling from my mattress to the kitchen to open a can of beans.Â  It […]

Everyone has heard of the term, ‘teen angst’, or at least you should have heard it before. It’s a period in an adolescent’s teen years where many changes are taking place all at once, and it may cause some strange side effects. Depression, withdrawal from family and even friends,Â ‘out there’ ways ofÂ style,Â and very volatile behavior.Â These ‘strange’ things happen because of the unbalanced hormones in the teen’s body that are trying to get balanced, preparing them for adulthood.

I am 15 years of age, 16Â on July 22nd. I was prescribed Prozac last year aroundÂ the beginning of June. Now,Â ifÂ myÂ ‘depression’ were to be stemming from teen angst, like many […]

So many words and feelings in my chest….it hurts to try and push them out. I feel so sick and volatile. I just wish I could scream at everyone around me and burst intoÂ a million useless pieces. I keep thinking you’re here, when you’re gone into a forever I’m not capable of really knowing.Â I wish I could forget, and wash away with the roadkill.

I want to escape this pain so bad, all of this darkness that overwhelms me. I wish I could be free from these chains of regret, remorse, major depression, and saturated loneliness. I can’t commit suicide, which hurts even worse. My family […]

Rip currents choking me constantly. No matter the amount of pot smoked, or the amount of Prozac consumed. Torturous and stabbing thoughts barge into my mind and kill the newborn happiness and peace with their burning hot swords. The pain is sour, hot, liquid fire. It erodes the walls of my mind that act as a nursery to the best parts of me; the healthy parts of me. Trying with all of it’s might not to tumble over and lose the battle, the walls of my mind rattle and shake to stay erect and guard over my inner happiness. It sends shock waves down my […]

I legitimately want to die.
I can’t tell anyone.
They say I’m a good person. That may be true. But I feel like dead weight. I really do not want to talk myself out of this.
I hate the idea of not being able to make a truly positive impact in someone’s life. It feels like the people closest to me find me intolerable.
I feel intolerable. For thinking this at all, I feel it is all the more reason to stop monologuing and go through with it.
I’ve killed myself so many times in my mind.
I don’t know who I am.
Blame it […]

I’m surprised that people responded to my post about wanting to die probably because I’m used to being ignored when I need help the most. That’s right – ignored. It’s called growing up with a depressed, emotionally distant mother who was too preoccupied with her own problems to give her baby girl the nurturing and love she needed. Sneer if you want. Whatever. I don’t give a fuck. I’ve spent years in therapy, group therapy, on medications, making crazy, fucked up choices that intellectually I could not defend or understand yet I acted on anyway. I finally, finally put it all together: not enough of […]

There’s no other site like this one in the internet world that I’ve seen, and that I actually like. My relationship with this place is more of a love/hate relationship. I’ve been here many times in the past, the last time ending in an apocalyptic fashion, as I would have described it then. Those days were godless, drama filled, and just black.

So I guess I’m here again not to prove some sort of point like before, but to try and be more creative through poems, short stories, and my descriptions of events, people, and my own self. I don’t expect advice from anyone. To be […]

Saw more than a dozen pregnant women today; a bit of my self died with that abortion.

And the rest may soon too.

Some of you know my story already. Well, I/m getting older every day and as a 22 year old female in this society, youth and beauty are the only value that can be given to a man in a relationship. I spent (wasted) two years of my best years and now my value has declined. I know this sounds harsh, Â but men become more attractive as they age and women–well, in society’s view– become bitchy, controlling, bitter and sexually invisible after a certain age. Biologically, men are wired to be attracted to youth and thus, fecundity.

I want to die

I’m a 17 year old girl, and I’m depressed and Â have anxiety issues.. Apparently it is quite common to want to die but it isn’t a good enough reason to actually kill yourself. If you do, people will be seriously hurt. If I didn’t know anyone at all, I would probably do it, but I do know people. So I have to stay alive.

I don’t have close friends because I push them all away. I’m never comfortable, even just sitting alone in my room away from everyone, I’m on edge. When I actually go out and do things, I have to constantly take deep breaths […]

I gave up on me

Hey. I’m 14, a freshman, and a survivor. I wanna share my story.
November 28, 2012. This is the day I swallowed 29 Prozac. This is the day I felt so alone, like always, but like I didn’t even deserve to breathe. I felt like I didn’t deserve anything. I was nothing. Worthless. A nobody. I’d lost everything. My mom. My bestfriend. My sanity. And someone took my innocence.
Two days earlier Nov. 26, 2012 I went to hangout with my bestfriend. He was 17. Yes I’m a girl. Yes he’s a boy. Yes we were bestfriends. We’d been that way for a long […]

since 3rd grade i’ve struggled with trichotillomania. for those who do not know, trichotillomania, often linked to anxiety disorders, is a hair pulling disorder. many people think it is just a habit -like my mother- but it is not. my father believes this issue of mine can be fixed by using punishment, he’s fed this idea to my mum and she’s tried it. of course it didn’t work. my doctor suggested prozac -my mums against any anti depressants- i want it so badly. i want it so that i can have my hair grow back nice and thick, i want it because a side effect […]

Hi all, just some thoughts

Hi all, just registered, found the site through some google work. Have been hospitalised for 7 months in February with a nervous breakdown/depression (not certain which, they never told me) after being on Xanax for years. Been back to work in October and had to go see a new psychiatrist for follow-up who subscribed me on Fluoxetine (Prozac). I was doing ok (relatively) before that but for some reason I’m now more depressed than before instead of vice versa. The medication also makes me highly nauseous, especially sick in the morning, and causes severe heart pain in the early hours of morning when lying in […]

Life is full of pain

This is my first time doing something like this. Not sure why I’m doing it, but yeah.

I’m 20 and live in England. Ever since I was young I’ve been different. I’ve always had a different outlook on life, and people, and so on. I try to be a nice guy, just like everybody else, but people never seem to do the same. I’m quite an anti-social person, so there’s that, but I always have time for people if they need me and never close the door on anyone – until they walk all over or something equally depressing.