All Hail The Crimson King

Ok, so here’s the disclaimer…if you haven’t read The Dark Tower series of books by Stephen King then this post isn’t going to make any sense to you at all.

Really what this post is about though is life, or my perspective on it from a literary sense.  You see, through out my life, I’ve been an avid reader and Stephen King is my favorite author; and the Dark Tower is my favorite series. Its a series that I felt I identified with on a somewhat spiritual level. For those of you who’ve read my other post especially my first about my life, I’ve spent the majority of my life on what I felt was a quest. A quest to find the happiness that I felt was denied me in my younger years.

Therefore, every time I read these books I always would equate myself with Roland of Gilead, the gunslinger, on his quest for The Dark Tower, and once there he would climb to the top and find victory. After all, everybody wants to be the hero right? Right. Even if you don’t admit it, you do. For me, every year that passed, every step I took, I was a step closer to finding my own tower, the love of my life. Like Roland, I kept going long after it seemed fruitless to proceed. I crossed the desert of my life. I lost friends, and loved ones. But still that Tower beckoned me. One more step. One more step. Keep going. Never give up.

Two and half years ago, I thought I had at last gained my Dark Tower. I would cross the field of roses, signifying the love I carried in my heart, and at the center…my Tower, my Diana, and I would at last find the peace I had sought all those years. But it was an illusion. There was no Tower. No love. No peace. Only emptiness. My Tower had fallen, and the universe that it held, mine, shattered apart, and I was left to face the monsters that dwelt in the space between worlds. In todash.

So as my life winds down, I’ve found myself doing the things that used to give me comfort. Watching movies that I want to see one last time. Reading books I loved. I just finished The Dark Tower series again. And a funny thing happened to me.

I realized that I was never Roland.

Instead one of the other characters (and my personal favorite) spoke to me. I saw my life through his life, and knew I had been seeing myself as the wrong one all along.

He started as an outcast from his own kind. Taken in when he was wounded, by a friend. Never left that friends side, and defended the bond they had as friends, and the love that only friends can know. Even when his friend died, and he felt like dying too, and would have, if not for a promise that he made to that friend. To go on. Save Roland. Finish his part in the story. Only then could he finally rest, and be reunited with that friend he loved. I was Oy.

Diana…I promised to love you until the day I died. I kept that promise. My part in the story is over, and I can find peace now. I was not Roland. You were not my Tower. I was Oy. You were my friend. 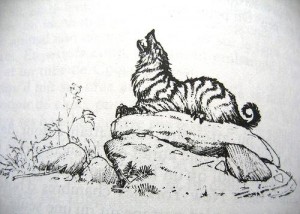