Phew! I’ve been waiting to post this ALL DAY! :O Had to save the script all in my head and everything. >_< Then I had to take two more hours to finish the 2nd and 3rd charts as I just discovered them today…

So like, maybe it’s a bit masochistic, but sometimes I really want to know who I am that I even took these chart things I found seriously, about how much a fictional character has suffered and how much they deserved it. :p

I found it from a Berserk page from Facebook. :p I think these come from 4chan… yeah. XD

Anyways, this may be kind of random, but I wanted to ramble a bit to buzzedloser. >_< I want to be able to find a way to talk to you in private. :3

I like that Edith Finch game! <3 I actually had a weird dream two nights ago when I could only watch about 24 minutes of the 1h 45m game…

I had a dream because of the big, magical house, I have a lot of dreams like it in my life, and these two girls lived there with a grandma, and it was like, this beautiful story… the house was big and fancy but run-down. Some kids knocked on their door just to bully them too about their house and stuff, but they didn’t care and tried to told them off, and were going to stay there forever, or something. :p

It was weird though, it all felt really melancholic and bittersweet, like they’d rather the world just pass by them and stay in their happy life forever…

Some elements of this, whether the context is a lot different or not, oddly enough seem to appear in the game. ._. Walter and Lewis, and maybe Gus, are probably the characters I relate to the most…

So like, I’m hoping you guys know what a lot of these characters are without me saying anything and can like… know which one you relate to the most and evaluate yourself a bit. :p

I’m not sure how much I agree with the charts, but their interesting. 😕

Anyways, with that said, enjoy! :3

(I hope this article isn’t too graphic heavy or anything and causes people’s stuff to lag. 🙁 Including myself, my own post, that would stink. T_T I hate lag. :p)

(Next up, I might talk about anything from stories I try to make but never finished because I got distracted, unmotivated, worried it will never get published, and so on. T_T I hope people like any of them. 😕 Also maybe some jokes and silly stuff. :3 And… stuff. :p) 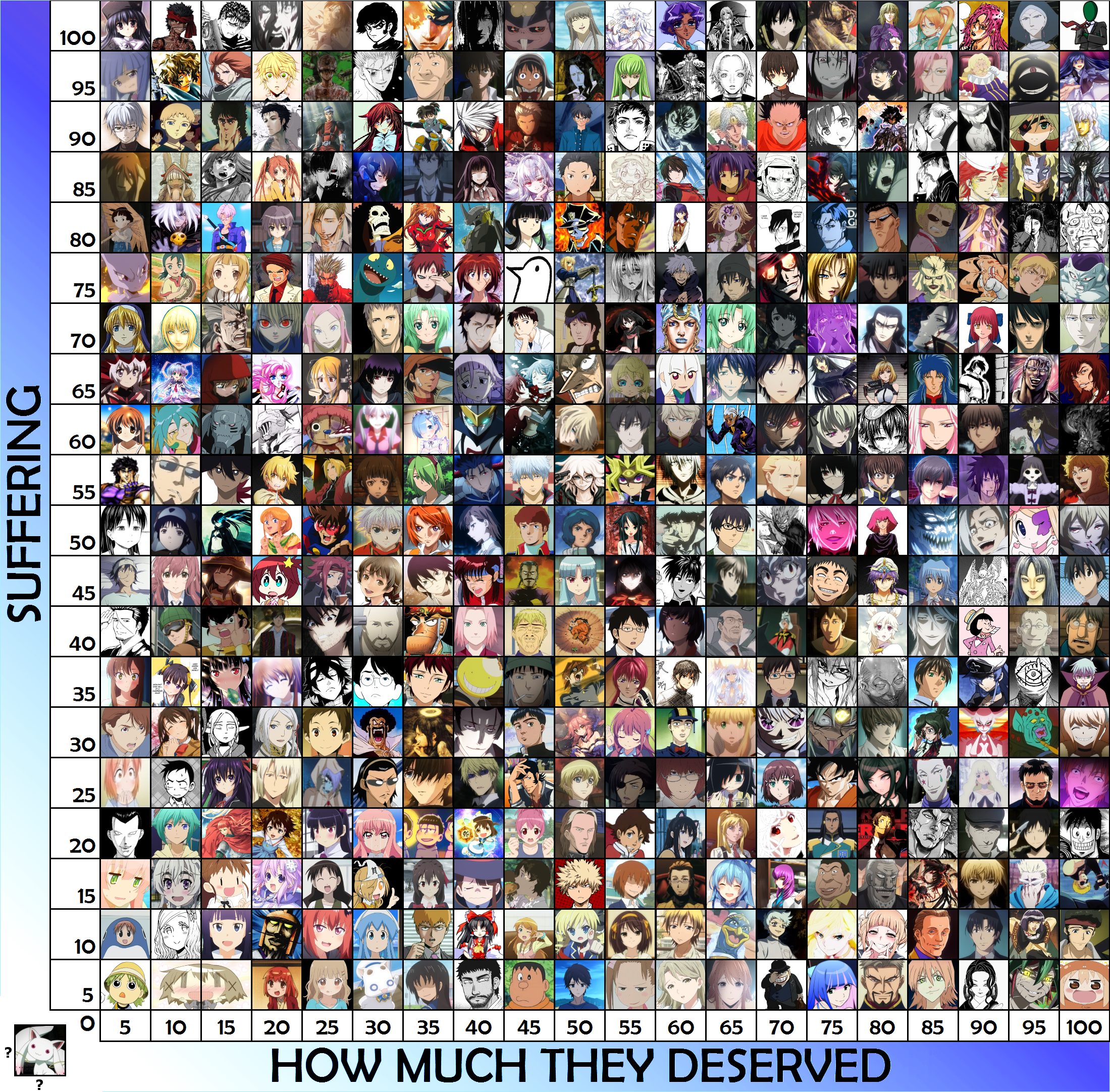 (I had to rush with these bottom two, so they may not be as well thought out. 🙁 I don’t really know. :?) 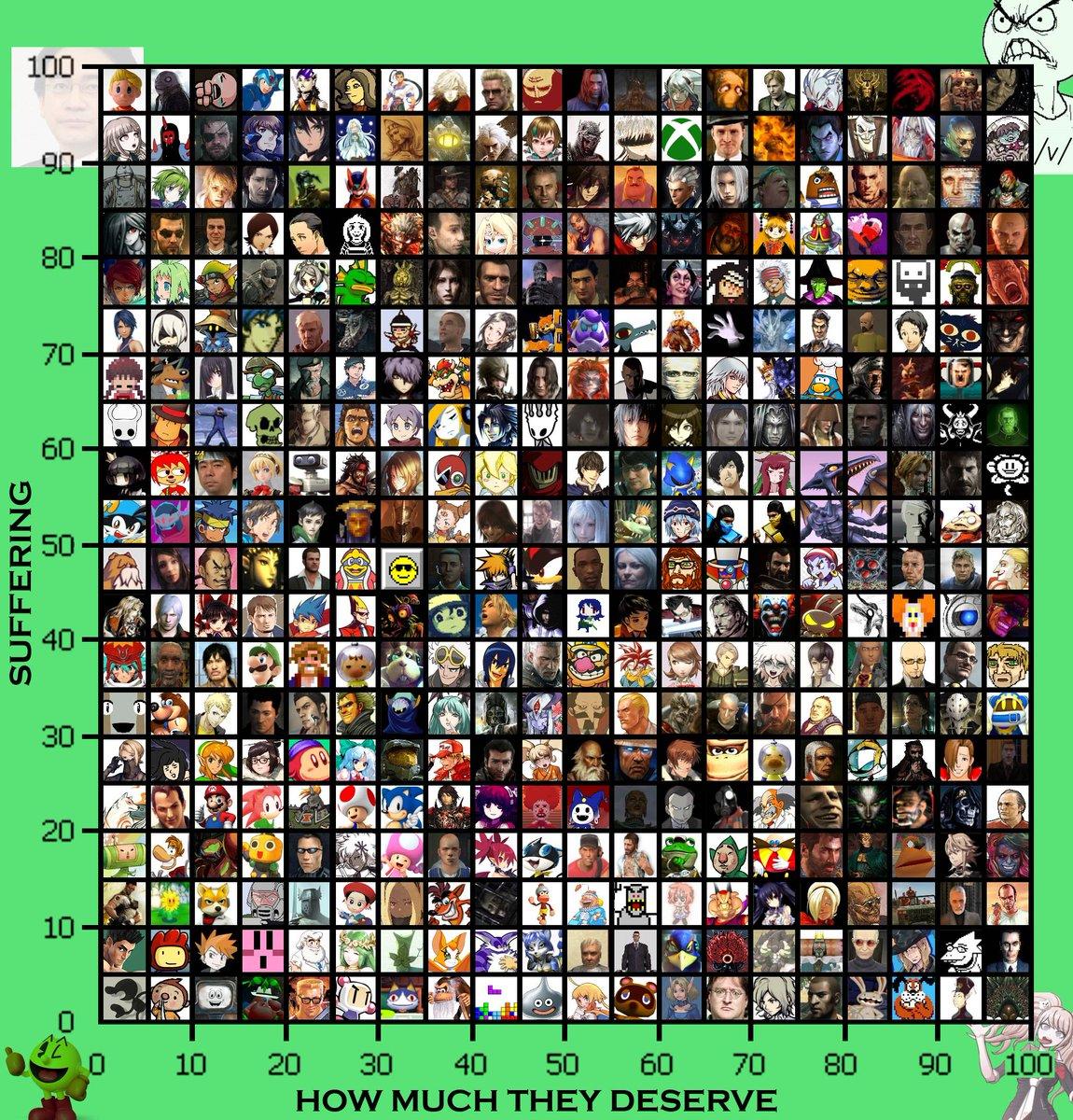 (Note: I always believed that as long as I have enough power to change the world I live in and my life, I could literally live through any world…
and hopefully if I don’t have to be alone either, long as I’m not forced into anything and I’m free…
Sometimes I wonder if the lives of morally ambiguous characters that I like actually live better lives than I do or not…
Guts, Lucy, Russell, anyone… It’s not fair that the more anti-heroic can go through the depths of despair, clinging on to a flimsy hope,
and make it out okay, and it’s usually by love and/or friendship… but the more anti-villainous lose. 🙁
I want them to win… I don’t want them to hurt the genuinely innocent and good people, but I want them to win against the true evil and be happy…
It’s sad that anime/manga and game characters or whatnot, some of them at least, feel more real than people in the real world…
Everything seems so fake, stupid, evil, crazy, or whatever… more than anything though, everything just seems like a lie… it’s not real living…
People are dishonest, and never really tell me how they feel… I want to connect to other people and express myself all the time with people caring,
but they never do, and for that, I fucking hate them all and want them to die… Any life is better than this one, long as you have power…
Power, freedom, and wisdom are the most important things… Love and friendship come second only if you can find it and make it last…)

(The above is an old note I made in a computer document. :p)

(Note (1/8/18): Apparently, anyone from around 50 and lower on the deserved range, the left side, have a clear backstory and motivations,
with higher numbers showing that their actions and words might possibly outweigh them, while possibly still being sympathetic. :p
Their the anti-heroes/anti-villains of a story.
Their the type that might kill to save a loved one, or destroy the world if they feel it’s evil or it’s wronged them…
Any higher than that, and their just plain an unsympathetic asshole or a monster. :p
On the other scale, at high enough levels above 50 or so, the amount of suffering involves supernatural causes and are sort of impossible,
for a regular person. 😕 That’s basically the list anyway. :p) 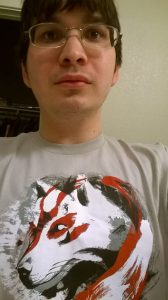