The story of the Barren Fig Tree

Then he told this parable:

Cut it down! Why should it be wasting the soil?’

He replied, ‘Sir, let it alone for one more year, until I dig around it and put manure on it. If it bears fruit next year, well and good; but if not, you can cut it down.’ ” 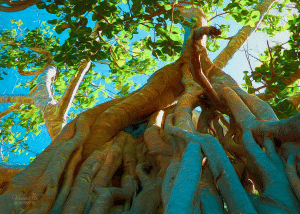 STOP LYING TO ME

on the other side of the glass

interesting side note; my neighbor has a fig tree, and as long as he left it alone it produced delicious figs. A few years ago he started messing with it, and we haven’t had figs since.

Oh! Also most figs have wasps in them, because one of their main pollinators is a wasp that dies in the fig to fertilize eggs, which is my idea of a meaningful death.

There was an episode of the show Leverage where they faked a miracle to save a failing church, and the last service at the church the pastor did a sermon on this scripture. He did it on repent or perish, because apparently it is the fig’s problem that it isn’t producing.

Then I had to look the damn thing up, and we never get an answer as to what happened to the doomed fig tree. The gardener believed in it, that’s the ending. He went out on a limb (get it?!) to save the tree and we don’t even get to know whether he was right?

“The kingdom of God is like a traffic ticket, the officer said ‘you were parked over the line, and therefor owe the ticket!’ but a passing lawyer saw the exchange and said ‘I have vital evidence which will invalidate the ticket!’ ….. the END!”

I guess it’s plausible that it’s not the same fig tree but Jesus later curses a fig tree and it withers and dies:
Mark 11:
12 The next day as they were leaving Bethany, Jesus was hungry. 13 Seeing in the distance a fig tree in leaf, he went to find out if it had any fruit. When he reached it, he found nothing but leaves, because it was not the season for figs.(D) 14 Then he said to the tree, “May no one ever eat fruit from you again.” And his disciples heard him say it.

15 On reaching Jerusalem, Jesus entered the temple courts and began driving out those who were buying and selling there. He overturned the tables of the money changers and the benches of those selling doves, 16 and would not allow anyone to carry merchandise through the temple courts. 17 And as he taught them, he said, “Is it not written: ‘My house will be called a house of prayer for all nations’[a]?(E) But you have made it ‘a den of robbers.’[b]”(F)

18 The chief priests and the teachers of the law heard this and began looking for a way to kill him, for they feared him,(G) because the whole crowd was amazed at his teaching.(H)

19 When evening came, Jesus and his disciples[c] went out of the city.(I)

20 In the morning, as they went along, they saw the fig tree withered from the roots. 21 Peter remembered and said to Jesus, “Rabbi,(J) look! The fig tree you cursed has withered!”

22 “Have faith in God,” Jesus answered. 23 “Truly[d] I tell you, if anyone says to this mountain, ‘Go, throw yourself into the sea,’ and does not doubt in their heart but believes that what they say will happen, it will be done for them.(K) 24 Therefore I tell you, whatever you ask for in prayer, believe that you have received it, and it will be yours.(L) 25 And when you stand praying, if you hold anything against anyone, forgive them, so that your Father in heaven may forgive you your sins.”(M)

On that note, growing up religious as I did I believed that if I TRUELY BELIEVED then I could ask God to fly, my six year old self just wanted to fly away. But I still can’t fly so I guess I didn’t believe enough. Lol.
Now I’ma little cynical about this, because of you don’t get what you pray for then you must not believe but of you do then good blessed you. It is just so manipulative. Shrugs

Sounds like a second chance and a final chance.