The Hikikomori phenomenon in Japan 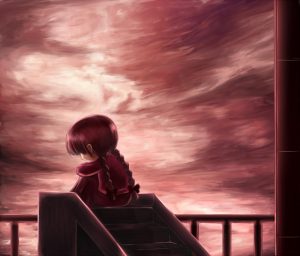 A really popular freeware rpg maker horror game, Yume Nikki is a story about a socially reclusive girl who never leaves her home and instead sleeps to live in a lucid world of dreams and nightmares, from the serene to the disturbing…

The game has no plot or dialogue to speak of, but instead a big open world with a lot of creative interactivity with these effects that you collect.

Many people have tried to come up with their own explanations on this game’s imagery, whether or not any symbolism actually exists, and have even made their own fan games, which there are many.

I’m not sure what to say other than that, sorry. 🙁 I have a description of this game in my profile too. :p

Yume Nikki: In a silent world, a lone girl who refuses to leave her home does nothing but sleep and play games all day and night… In her dreams, there are a number of interesting things, from the disturbing to the serene. What does it all mean? That is up for you to decide.

(A total classic, this game has gotten an entire plethora of fan games made in it’s name. The open world nature and surrealism draw in people a lot, if not the introversion.)

I can’t really explain this… if you still need help, you could probably google or youtube it. :p

I should probably talk about liking these somewhere on my profile, but meh… I’m probably pushing myself too hard with these things, but whatever. >_< (Though to be honest, their almost sort of uncomfortable to remember at the moment, they hit a little too close to home, and it’s hard to tell if that’s a good thing or a bad thing with these kind of themes…)

Anyways, there’s a few rare but noticeable anime/manga that actually seem to deal with social anxiety, either as a major theme or a minor theme, or something…

The most noticeable examples are ones that put a label on said anxiety calling it “hikikomori” which means a social recluse, such as someone who never leaves their home, and another one is “NEET”, which means someone who has no education or employment status.

Some of these actually tend to be a mix of drama and comedy, perhaps even black comedy. :p

Some of these are Welcome to the NHK, Watamote, and arguably Kotoura-san. :p

A. Welcome to the NHK 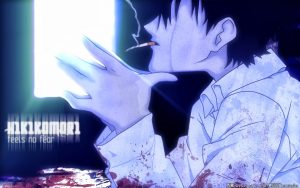 This is the big one, an anime that was originally a fairly realistic light novel, a somewhat lighter anime, and a rather… dark and kind of disturbing manga. o.O

The main heroine Misaki is a big contender for the atmosphere of the adaption, as her personality varies between them. :p

Anyways, the story basically revolves around the real life misadventures of a college dropout loner named Satou, as he claims at some point to have supposedly heard people talking bad about him behind his back one day at college which gave him huge self-esteem issues, if not other things you see in his flashbacks.

Over time he runs into a high school girl named Misaki who for unusual reasons becomes his self-proclaimed therapist/counselor, and an old friend named Yamazaki who helps him design a game.

Come to think of it, they both pretty much seem to help with his hikikomori and NEET status respectively. :p

This anime will probably have you both laughing and crying fairly often, it’s pretty out there… Soundtrack is really good too.

It’s hard to explain, but on Facebook at least, I’ve had a pretty big falling out with it’s fandom though, and now that I might be a hikikomori but no longer a NEET, I was wondering how much this anime even means to me anymore… 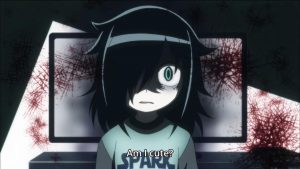 Now this one is mostly black comedy, though I think there were some moments of being genuinely sad. 🙁

I could have sworn there’s a moment where she decides to start her own club and making friends who just mess around and don’t really do anything… until it turns out to be just her imagination. D:

Sometimes though, main character Tomoko sort of brings problems upon herself as her extreme paranoia also harbors a lot of jealousy and ill-will which kind of makes her a big jerk… but then sometimes you just feel really bad for her anyway and want to give her a big hug. :p

And yeah, she’s a rather oddly creepy yet adorable looking character, a rather tiny teenage girl. XD 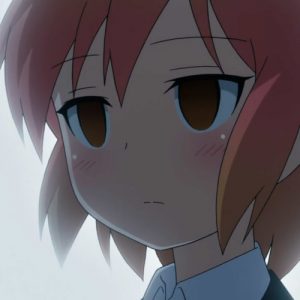 It’s thanks to this anime that I knew or at least cared to learn about a mental illness called “Avoidant Personality Disorder”.

Anyways, I was expecting this to be a lot more dramatic and serious and feel more like Fruits Basket… but if I remember correctly, it’s humor actually has a lot of ecchi (perverted humor/fanservice) in it. ._. That was kind of weird… I mean, it’s nothing too explicit, but still. :p

Still, the few parts that got to me were pretty sad…

Basically, Kotoura-san uses a bit more of a fantastical approach on a reason for isolation but still manages to be pretty effective.

The story follows a teenage girl who has psychic powers. However, she can’t really control these powers, and often blurts out secrets another person may be hiding. People got so offended by this that everyone started to eventually reject her when she was initially a very cheerful child…

It even caused problems with her family, in which I think her parents are divorced and she lives with her wealthy grandpa instead, or like an apartment paid off by him or something. o.O Her mother is even considered to be the main antagonist hiding in the shadows of this manga…

After suffering from numerous traumatic events, Kotoura initially becomes withdrawn and isolates herself from the world with an empty stare… this lasts all but 1 or 2 episodes though. :p That being said, that doesn’t mean the anime still isn’t without some level of drama or conflict, but yeah…

Eventually though, in a gender flipped scenario similar to Watamote, she eventually runs into a boy that helps her open up a little.

And that’s basically all I got for these animes. :p

Hopefully you think their interesting too. ^_^