Which 2 pills would you choose and why? 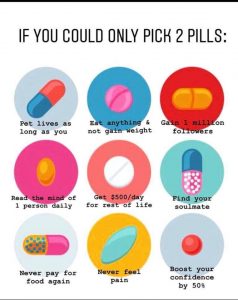 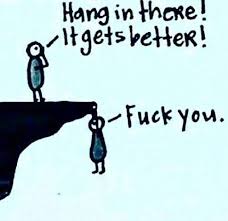 We are told by society that “we MUST forgive our abusers” and that if we don’t “then we’ll never find love and happiness.

First of all- this is a** backwards. Why is it that the VICTIMS are the ones who must forgive the a**holes? Why is it that when people do heinous things to people, say for ex, a little boy who gets raped, that it is incumbent upon the BOY who has to forgive his abusers. WTF kind of logic is that?

People who have been abused are already abused. Now on top of that, people are pointing fingers at the victims who are suffering, and basically implying that they are depressed because THEY haven’t CHOSEN to forgive their abusers, and that THEY must “choose the high road”, etc etc.

It’s shaming and blaming the victims even more. It’s not like anyone who’s abused wants to live in pain and agony, or live with so much anger inside themselves. It’s not like we can simply tell ourselves, “ok, let’s just forgive x, y, z, and ok, Done!”

It doesn’t work that way. Forgiveness is a RESULT of the person working on their lives and in the end becoming free from the past that haunts them. Sometimes this takes decades. Sometimes it never gets healed or “fixed.” But forgiveness is not something you can simply tell yourself to just do and that’s that. No one WANTS to be in pain and hold on to all that pain and anger. If we could all just “let it go” we would. But it’s not so easy, and life doesn’t work like that.

I’m just pissed at society that points the finger back at us, the VICTIMS. We are BLAMED for our depression. “Well, if you just forgive x, y, z, then you won’t be depressed anymore. If you’re still depressed, well then it’s your fault.” That’s basically what society is telling us.

If you had the Death Pill

Let’s take a poll.
What would you SPers choose?

Depression is like a Shadow that never leaves you

It’s always there. Maybe there’s a few days of brightness in between, but the darkness is always there, always waiting for you, and always pulls you back. You turn into a lump of coal, not doing anything productive, and feelings of utter bleakness and hopelessness set in. Or more like, they’ve made a permanent home, and occasionally they leave for a walk.

Anyhow, how does anyone get over depression? How many people who’ve had severe and long-lasting depression, have actually improved and gotten better? How many remain stuck in their utter desolation and pain? I yearn to be free of this darkness, this darkness that is constantly enveloping me. Well, I would have to be dead for that to happen. Depression and me have been together since…well, since I was little. So, little hope of it ever changing or it going away.

What have you accomplished in your life?

A huge part of my depression is my lack of accomplishment. It makes me super depressed watching other people do something with their lives. Not just celebrities, but even silly YouTubers. They’ve all managed to make something of themselves, even if it’s for being popular for no reason.

No, I don’t care to be popular, that was just an example.

And before you can say “Then just go do something,” I have been battling a ton of health problems for the past 15 years, so I can’t just go and do [insert whatever activity]. It’s stopped me from doing everything. I used to be so active, did so much, but now…now what am I? What have I done? For the last 15 years, nothing. Nothing except be in pain and struggle. Struggle, struggle, struggle.

No, I shouldn’t compare myself to others, but what else can you do? We *do* compare ourselves to others, that is why many of us feel the way we do.

It hurts to see everyone so happy and healthy and carefree and doing whatever they want. It makes me cry and die a little more each day.

I just feel so shitty, like why do I have to be sick? Why can’t I be healthy like everyone else? Why does my life have to be so broken, so ruined and so alone?

Stuffing my face with ice cream

No more option to not be on google search?

Hi guys. Today I noticed that when I create a post, it no longer gives me the option to opt out of having it shown on google search? It used to be in the menu options but now it’s not? (was under All in One SEO Pack – Social Settings). Has it changed or am I just not clicking the right areas? I don’t want my posts to be easily searchable on Google. Thanks.

The hardest part of life is…

fill in the blank

How do you describe yourself?

How would you describe yourself?

Why does life have to be so hard?

I just want to be happy, healthy, and well I don’t need to be wealthy but make good money.
I just want to be loved and wanted.
I want my life to matter, I want to make a difference / have an impact.

Because otherwise, what for is my existence?? Why must I be born, live, and suffer for so many years? It’s been decades of mental and physical pain and I’m sick and tired of it.

What is to come of us sad, morbid SPers? A lifetime of more misery? Or will half of us find “happiness” (or something like it)? Or…

Are there decisions you’ve made you wish could be undone? (or done differently)?
Do you have regrets that you still have not gotten over? like for decades?

There’s a few big ones for me that I just have not been able to get over.

What’s done cannot be undone, and what’s not done then cannot really be done now.

Life has beaten me down

Too tired to get up and fight anymore.
There’s just too much depression and misery and sickness, and no love and no joy.

Some people have a great life. And others…we hang out here on SP, forever thinking about death… Sigh…

I swear, the day I actually want to live, is the day I get sick(er) and die.

Do you think you’ll ever get “better”?

World’s 2nd deadliest poison, in an aquarium store near you

Should I have a bday “celebration”?

I don’t really care to have a bday celebration, but I do want to eat cake, and try lots different kinds of cake at Cheesecake Factory, but I don’t really care to do the whole dressing up, bday song, inviting everyone, waiting 2 hours for a table there, and all that thing. After all, it’s another year older, so not really something great or something to celebrate.

But on the other hand, I’d prolly be sad if I stay home and do nothing that day…