I am 20, turn 21 in October. I am an artist and graduated from Cosmetology school.

I just got out of an abusive relationship. I will not say in what profession, because I don’t want to give out too much information, but it was in a profession of pressure, where you’re expected to be hazed and belittled. This relationship was not a boyfriend or a husband, it was mentor-to-apprentice. Most of the time, when you hear of abusive relationships, it is a significant other, and I just want to say that, sometimes, it’s a boss or a friend.
This man had incredible talents, and I had the opportunity to become highly skilled in my craft from learning under this man. He […]

I woke up this morning, thinking it was all a dream. Thinking that, maybe, I was just so stressed out, I was having bad dreams. I was wrong, though, and I knew it. My step-father really had tried to kill his own daughter. And like a scared soldier in the front, I stood there shaking in my boots.
I keep thinking to myself that I should’ve acted sooner, instead of standing there, too sacred to move, as my step-dad tried to strangle and punch my step-sister. Is own daughter…. Who could do that?
Eventually though my adrenaline kicked in. I screamed at first, demanding that […]

Peacock of Prosperity and Good Fortune 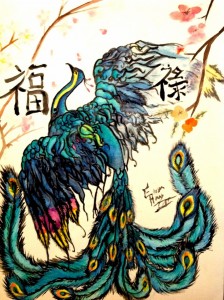 The Peacock of Good Fortune and Prosperity. I wish you all good luck with your lives and may the sun shine and warm your backs for eternity. Through days that seem of gloom and nights that sound of terror, I hope you will feel safe with this peacock. I hope prosperity for those who don’t have the best homes, and I know that pretty much everywhere, not many can pay their bills each month. I wish you all well, because I know that […]

Rise From the Ashes

It wasn’t violent, the attempted rape. It was mostly tearful, with me pleading for the man to stop. And sick and disgusting. It smelled gross and dirty. I could smell his sweat, I can still smell his sweat. I will never forget it. I will still remember the scent after he got done, after he realised I want going to let him. I fought in my drunkenness.
He had told me that he wanted to talk to me.
William Triplett was his name. He was an ex of mine, and I had just turned 16, and he was 25. I was desperate to find someone […] 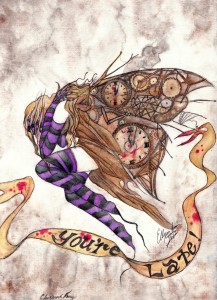 I based this off of Amy Brown’s faeries. She’s amazing.
I did this forever ago, and it still stands true to it’s meaning. It means I always fuck up. It means that I’m always messing up, always failing, always late. And I hate myself for it… And I don’t mean to… I don’t know what to do about it even….

I Am So Confused

Why do I keep fucking shit up? Why am I so stupid? I just… Feel like I am no good to anyone. I feel like all I do is screw shit up. I have nowhere to go, no friends that I can rant to freely without them getting annoyed and I’m left to this site. I have hit rock-bottom, and my last resort was this website.

Tell me, how pathetic does that sound? A site called The Suicide Project is where I go to when I need to vent. Yeah, most may call me lucky: I’ve been accepted into an amazing cosmetology school, I’m a model, […]