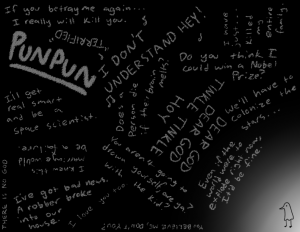 So like, there’s this really good yet depressing and utterly nihilistic manga called Oysasumi Punpun… yet it’s BECAUSE it’s depressing that I also find it extremely relatable and can’t keep my mind off of it, no matter how soul crushing it can be at times…

In fact, the level of despair in this manga is so relatable at times, it’s actually kind of scary. o.O

I even got two physical copies of omnibuses even after reading the whole story last month, I think I finished on like June 10 or something…

I’d love to put down all sorts of stuff about this manga, but I don’t want to ramble or spoil too much…

You can find it on places like kissmanga or mangareader. :p

Anyways, here’s probably the most relevant part(s) I can think of right now.

“At this moment, I must make a very grave confession to you. I have just… killed my entire family. It’s not that I had any problems with my family life… In fact, I think you could say that I’m grateful to them…”

“My father devoted the majority of his life to work, and my mother to the education and upbringing of her children. My sister is marrying a public servant next month… But I want you to think hard. It looks like a perfect, happy household, but that’s just a front. Sickness, accidents, disasters, betrayal… Only God can tell you when you’ll pick a card of misfortune. In his retirement year, my father told me, “Now I’ll enjoy my second life.” It was afterward that he learned he had cancer. Fighting to hold on to a small kernel of hope and fortune that can buck you off at any moment – can you really call that happiness?”

“I couldn’t stand to see it anymore… Everything became so sad to me… so I killed them… It was the release of their souls. I want to say… that my actions were a form of love… But… But Still…”

“I’ve hidden all three bodies in the old unused miso factory on the outskirts of the main K-Town Drive. There’s also an amount of cash equivalent to the courage to find it… So I want you to find their bodies and tell the media. By the time you’ve seen this video, I will have left a will behind and departed from this world… I’m expecting much of your courage and curiosity…”

(While doing homework at night and listening to a strange radio station.)

“(…) At this time, Punpun was studying very hard. There was no real reason why, it just seemed to help calm him down. Maybe he’ll study extra extra hard, enter Tokyo University, and then become a nuclear physicist of a secret underground organization…

“And then he’d destroy mankind… Hahaha! Just kidding! What a funny child!! Hi, I’m a 7th Grade male student. Due to domestic violence, my parents have divorced and my mom drinks all the time now. And at night, I hear my uncle have sex with his girlfriend in the room beside mine. I have no dreams and I have no girlfriend. How should I live on from now? From, a listener with the alias “Angel Pie”.”

“Even though it should be Spring soon, winds cold enough to freeze a town over, were still blowing throughout the night.”

“But Spring will still definitely come. There’s no such thing as a never-ending Winter. Punpun thought to himself that if today was a tough day, that a tomorrow filled with joy would be waiting. If not tomorrow, then next week. If not next week, then next month. If not next month, then next year. But happy times were sure to come again… that’s what he wanted to believe.”

“… But that was just his wish like fantasy… but so what? In any case, that was it for today. Goodnight, Punpun.”

“Humans are free. Although we can’t fly through the skies all alone, if we can think it, we can do almost anything. We can sleep when we’re sleepy. We are free to start or stop anything whenever we wish. Of course, it is a bit hindered by common sense, moralities, and the rules of society.”

“Walking nude out in the streets, stealing from the eldery, and even killing, we can do all of this as long as we throw out our morals. Which is why they drill these laws in our head when we are children. And yet people continue to fight, deceive, and steal from each other. And so, people suffer because they live. Even now, there are events of happiness and unhappiness going on all over the world… What can we do to make everyone happy?”

“Of course, that’s impossible for me to know. If the answer to that could be found in the shallow wisdoms of a kid, wars would have stopped long ago. After all, a great person is just one who follows the popular will of the people. In this world, the essence of a frank honest human is just an idealization. I’m sure that there’s nothing that can make everyone happy. Happiness is relative. And that’s how people want it. Evil is also relative. Mothers can become demons when they do anything to protect their child. Yet it’s usually seen as admirable. But when a person does anything for the country he loves, wars break out. Isn’t it all the same thing?”

“No matter how much a person pretends to be good and kind, he will still have negative aspects. But no one really tries to notice that fact. Why is that? They all try to place the blame on others, and never even consider the possibility that they themselves may have played part in the problem. (…)”

Punpun: “(…) I wonder when it was… that I realized talking with God was merely talking to my own self.”

It’s my problem not yours, so don’t worry...