I’ve been reading some of the other posts, and I think the arbitrary nature of our predicament is a common theme. I think that the rest of mankind is happily unaware of the brutal realities of our universe. If not, they certainly don’t let on that they are aware of such things. What sort of things?

Humans are fantastically creative. We are creatures of narrative. So when we explain ourselves, it is usually through storytelling. For the majority of written history the dominant narrative focused on spiritual beings who impute a deeper meaning to the actions of humans. There is no central common theme. Christians believe in redemption, a process by which contact with the divine purifies what it touches. Taoism is my personal favorite, considering the greatest purpose to understand truth. That’s the closest to admitting there isn’t a point that any religion has. Scientology also has purification, but with a science fiction backstory. Then there are religions like hinduism which consider reincarnation the path forward, with nirvana (the spiritual state, not the Kurt Kobain band) as the end reward. Buddhists seek enlightenment.

I’m an agnostic. There’s probably something greater going on, and even if there isn’t, it is often beneficial to pretend. I think the most likely end is when a person draws their last breath. Once you cease to get oxygen to the brain, the part of you that thinks dies, and your body turns into semi toxic fertilizer. If you have a death denial obsession, you can be embalmed and buried in a concrete sarcophagus like an Egyptian Pharaoh.  Did you know that the ancient Egyptians also mummified and buried massive amounts of middle class people. They also used beer as a currency, so maybe they knew a bit more about finance than us Americans.

I think the obsession with immortality is the narrative that has us all hooked. I write, because it is my hope someday to craft a work worthy of study centuries on. I’d like to create the modern Beowulf, but it’s pretty clear that’s a high mark. It would be success just to be read by future generations.

Games are an interesting subset of narrative, which is what I intended to talk about from the beginning, before I started talking about epic poetry and bronze age idolatry.  There are games that we all KNOW are silly. Card games, board games, tabletop games, roleplaying games, sex games, ‘sports’, and so on.

Then there are those that most people figure out are silly. Like economics, and romantic relationships.

I’d charge that all narratives are silly, because they all suppose that the actions of some puny humans on a rock orbiting a star are important. Deep time is the method I tend to use to deconstruct how pointless and finite humanity is;

The average human lifespan for all of history is 58. So even compared to our own history, we are tiny and short lived little bugs.

Now, expanding back out; humanity as a species is 100 million years old. That always is the part that gets to me. We’re nothing compared to the mass of humanity behind us.

Our planet is a few billion years old, at which point our lifespans are less than dust, less than atoms by comparison.

The universe, at least we suppose, is 14 billion years old.

Now zoom back in. Today I worked towards the finish of Subnautica, one of the games that makes me happiest these days. I also spent an unreasonable amount of time and money tracking down a game from my childhood, Super  Mario 64. I admit, fully, that there is no productive end to these trivialities. I also must confront that the work I’ve done outside is only marginally less pointless.

Which is why I say; play stupid games, win stupid prizes.

We shouldn’t be shocked that our lives have no meaning, they never had much of a chance to.

Success and failure all look the same at a distance. So search for the games that satisfy, and don’t worry about it having purpose. That is my idea of a solution, a Myth of Sisyphus by Camus of a solution if there ever was one;

The Myth of Sisyphus is a greek myth about a wealthy man who tried to cheat death. Death in this story is Hades or Pluto, depending on who you ask. He managed to escape death a couple times, but eventually it came due. His punishment, throughout eternity was to push a rock up a hill. As soon as the rock reached the top of the hill, it would roll back to the bottom, resetting the cycle. It is a philosophical metaphor for absurdity. Yet, in his collection of essays on that effect Albert Camus supposed that Sisyphus must develop his own narrative, and his own reasons for why he does what he does. It becomes an act of rebellion, by continuing to toil he demonstrates his contempt for those who sentenced him to suffer unto eternity.

Which is another great perspective moment; we should be so lucky as to blink out when we die. It would be better to be gone forever than what the Greeks thought would happen. 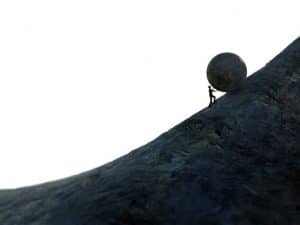 R. has lost herself

I wished I had missed out.

As a writer myself–although I’m a fiction writer, which is a somewhat different beast–I believe you certainly have skill necessary for the craft! You’re very “well-spoken”, and the way you present your ideas is sophisticated. You make complex things simple, which is one of the hallmarks of a good writer.

The people who think relationships are silly seem to invariably be the people who aren’t in them, perhaps an attitude which is a sissyphus rebellion of sorts in itself. I understand your overall message about absurdity and meaning though, and it’s well-received for a depressive like myself. Uplifting, even.

Thank you the post, please consider posting again, and best of luck with your writing endeavors!

Sisyphus had it easy! In the myths Prometheus gets nailed to a mountain while an eagle eats his liver for all eternity. I wonder what Camus would think his narrative is?

It’s an interesting question though – if your reason for living is deluded, does it really matter? If you go insane but you’re happy, maybe you’ve won? Perhaps we can imagine Prometheus happy, madly cackling with delight as the eagle tucks into his liver for the trillionth time, convinced that somehow he’s really sticking it to Zeus.

I don’t think I’d want that kind of happiness, but then I suppose I’m still attached to the idea of meaning.

The question is what you do when none of the games and prizes satisfy anymore. I guess that is basically the question Camus was trying to answer.

Life is essentially a challenge of distracting yourself until death, human reproduction is a reiteration of the process. Thats what this entire life is, a distraction. Thats why Buddhists call this realm of death and rebirth samsara, because samsara means “the great wandering” or something akin to it. Also Hindus also don’t believe reincarnation is a reward, they also strive for Nirvana but just call it Moksha or Mukti. Same thing.

I wish I could be positive and happy, say that life was worth while and beautiful. But the nature of a cynic is to be a disappointed idealist.