Monday sucks. Ew, get it off me 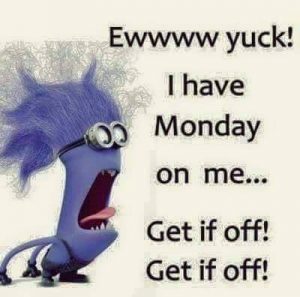 Sounds like a lot of us have had a sucky Monday. I think this is what Monday looks like. I’m glad it only comes once a week.

I just want to end it NOW

Oh God SP friends I am in a major crisis.  I am ready to find anyway I can’t to commit suicide.  I have just had it up to my eyeballs with this chronic pain and the bullshit of life. I just want to die. tell me why I shouldn’t do it. I’m so desperate to be done and gone.

Tired of being tired. Need encouragement.

Hello SP: I am having a really difficult day and need help/encouragement. My body hurts so much today. Just can hardly move. I am so tired of being tired all the time. I’m tired of not getting restful sleep no matter how long i stay in bed. I am tired of not being able to type because my hands hurt so much (I am dictating this.)

I am so tired of it hurting to cook and clean and do laundry and even work in my garden.

I have so much to do this weekend and I am so overwhelmed and so tired.

I really need help tonight. Thank you for listening.

Do I really exist?

One year ago: I had just been diagnosed with breast cancer and was trying to absorb the reality and decide what to do. I had been invisible for so long. After the diagnosis, my family and friends suddenly realized that I exist. The sister I hadn’t spoken to in six months was suddenly very caring and concerned. Even distant cousins sent me cards and emails.

Then it was over. Surgery successful; no chemo or radiation. Yippee. Then everyone left and I was invisible once more.

Then my dad lost his battle with cancer. Two months he’s been gone. I wish I could be where he is. Wish I could live in an endless garden of pansies.

Instead, I’m back to being invisible. Back to my miserable isolated existence. I hardly talk to anyone about anything meaningful. There is no meaning. I’m back to not speaking with my sister. When I told her I was depressed and wanted to die she accused me of being melodramatic. I’ve never been been able to share my true feelings with her.

The only reason I’m still here is I don’t want to hurt my mom. But I feel I am fading away. . . Becoming more and more invisible. . . Maybe eventually I will just disappear. 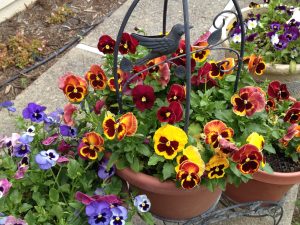 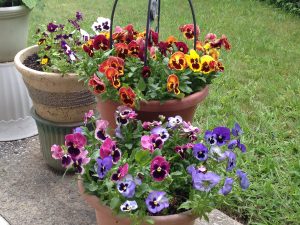 The word “invalid” fascinates me. Someone who is an invalid is somehow considered not valid; not worthwhile; not truly a whole person.

I feel invalidated by most people in my life. They simply don’t understand the physical and emotional struggle I face just to get through another hour; another day of this miserable life.

I am expected to help my mom because my dad just died. I say OK. But I really just want to scream “leave me alone, I want to join my dad” My sister and mom have no idea how close I am to suicide. How close I am to total insanity. I can barely write 2 coherent sentences of the medical shit I’m supposed to be writing to earn a living (I am a freelance writer but 75 percent of my work is for a medical liability insurance company.)

But I hate every minute of my life. (With the exception of admiring my pansies).

The way I see it, death is one of two things:

Thanks for being a safe place to share. Please help me. I am close to edge here.

It’s all so meaningless

Thanks to those who responded to my first post. It was nice to be heard.

It was another horrible morning. I wake up in so much physical and emotional pain. I don’t know how much longer I can take it.

Sometimes when I’m out in my car I just want to close my eyes and let my car soar off the edge of the road or something. I wonder if in that instant of being airborne I would have regrets and want to go back.

This is probably the only place I can say it: one of the reasons I haven’t done it yet is because I’m afraid I’m gonna live and end up paralyzed and in a nursing home. I’m afraid that if I try to commit suicide and fail, I’ll get put in a mental hospital.

The truth is, I just want to be by myself and I know that if I try to commit suicide I’ll lose that. I’ll have people around me all the time. And as an extreme introvert, having people around all the time is about as close to hell as I could get.

I am so tired of chit chat and small talk and meaningless comments like, “I understand what you’re going through” and “hang in there, it will get better.” I want to say, “How do you know it will get better. Do you have some crystal ball for seeing my future?” Why should I think it will get better? It’s been crappy for so long, there’s no reason to think it’s going to change.

I don’t really expect anyone to have answers. But it’s nice to have a place to say it without fear of being judged.

Mornings hurt so much

I stumbled onto this site when I was ranting to Siri about wanting to end my life. And I really do. I don’t have a plan, I just want to die.

Last year I had breast cancer and a mastectomy. I’m done with my breast cancer treatment but not over the pain of the loss. People say I’m lucky to have survived, but I don’t feel so lucky.

Two months ago, my dad died from cancer and frankly, I just want to go join him. If they told me that the cancer was back and I needed chemo (which I didn’t need the first time), I would say no thanks.

I’ve told my doctor that my quality of life is about a 1. But no one cares. No one hears me. No one understands. I hate waking up in the morning and facing another day of misery. I’m self employed as a writer which may sound great but it’s hard to force myself to write when I hurt so much.

I feel so alone, but I don’t know how to reach out because nobody wants to hear how miserable I am.

My life is pretty much like the lyric from the Eagle Song, “Learn to be still.” “There are so many contradictions in all these messages we send. We keep asking: how do I get out of here and where do I fit in.” I want desperately to find people who understand me and hear my misery and my desire to die. But in my case, misery hates company. I can’t stand being around people where I have to pretend that everything is the meaningless “fine” that people expect you to say when they ask, “how are you.”

I would appreciate hearing from people who just get it. And maybe somebody out there can tell me how to not hate waking up in the morning.

Affirmations do not work for me because most of them are based on lies.  At least that’s how they look to me.