â€œI have tried to view it from the interior of those who call themselves suicidal or suicidesâ€.

I just wanted to recommend this book which i know will be of interest to many of you,

I have found it quite difficult & frustratingÂ  to find serious, intelligent & quality critiques or books on other point’s of view about Suicide & this subject overall, as all i keep becoming drowned in is only the fucking Utilitarianism & Christian Inspired Philosophy which is very annoying & frustrating,

Anyway i hope some of you will check it out as i justÂ ordered this bookÂ after a final straw kind of day today.

Just to mention in passing,

Jean AmÃ©ry took his own life 2 years after writing this book. 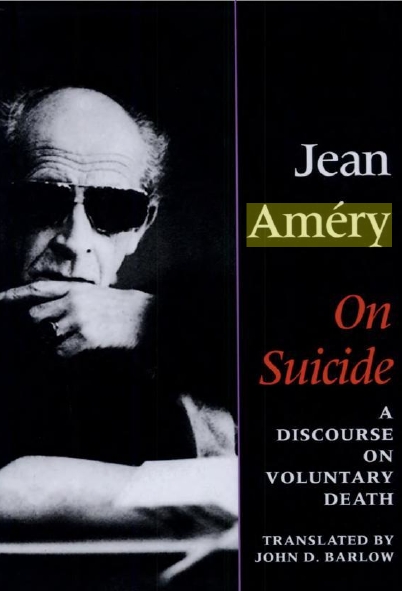 “We Only Arrive At Ourselves In A Freely Chosen Death”

(Some Words of Jean AmÃ©ry)

“A rather long life of intimate association with death in general and with voluntary death in particular, conversations with knowledgeable friends, and certain life-determining individual experiences gave me that sense of my own legitimacy which is the condition for writing. In many places readers might misunderstand me and think that I am conceiving here an apology for suicide. Such a misconception is to be emphatically precluded. What may appear to be apologetic is only my reaction to a kind of research that pursues the subject of suicide without being acquainted with the specific human beings in search of their own, freely chosen death – who find themselves in an absurd and paradoxical situation. I have tried to do nothing else than to pursue the insoluble contradictions of the condition suicidaire and to bear witness to them – as far as language can”. (Jean Amery from the Preface). Jean Amery thought of “On Suicide” as a continuation of the kind of reflections on mortality he had laid down in On Aging. But here he probes further and more deeply into the meaning of death and into the human capacity for suicide or voluntary death. Although religion and society may treat suicide as an unnatural and absurd act, Amery claims that it is no less natural and absurd than many other forms of living and dying – and in many cases is more natural and reasonable than other alternatives an individual may face. “On Suicide” is neither a defense of suicide nor an invitation to assisted suicide, but an analysis of the state of mind of those who are suicidal and who actually do commit suicide. It is also a strident defense of the freedom of the individual and a plea for the recognition of the fact that each one of us belongs to oneself before belonging to another person, or an institution, nation, or religion and that one’s right to choose to end one’s life can have priority over social entanglements and biological destiny. As he did in On Aging, Amery approaches the subject of suicide in a series of reflective literary essays, more philosophical than they are sociological or psychological. Suicide for him is not a problem or a sickness that society and human beings need to be cured of, but a distinctly human action, in fact a “privilege” of being human, that needs to be understood on its own terms. “On Suicide” begins where academic and scientific studies of the subject leave off. “Instead of viewing voluntary death from the outside, from the world of the living and surviving”, Amery writes, “I have tried to view it from the interior of those who call themselves suicidal or suicides”.
AmpApologyContinuationContradictionsConversationsFinal StrawFuckingHuman BeingsIntimate AssociationJean AmeryKnowledgeable FriendsLegitimacyMisconceptionMortalityParadoxical SituationPhilosophyPrefaceProbesQuality CritiquesReflectionsReligion And SocietySuicideSuicidesVoluntary Death
1 comment
0
Email

Thanks! I’m definitely going to get this book.