Again, I can’t process anything. I woke up at 5am to see this on Facebook. All this time, since I left WV, I haven’t been able to process anything. I cried, some, after reading this and giving it a minute to sink in. The worst thing you’d ever want to hear. It’s so surreal. But this is the woman who took my cats when I lost my home. I ended up in KY when I couldn’t stay at the place I paid $1700 to move in to in OH. I lost that money and had only $800 left. It was too cold and cramped in the car and a snow storm was coming. I stopped at a motel that allowed pets and called the local vet clinic, asking for a no-kill shelter or rescue and they gave me her phone number… http://www.hlntv.com/shows/nancy-grace/articles/2015/12/23/stephanie-e-fields-charged-with-animal-cruelty

I have no idea what happened to my babies because she gave me a different story every time. They were paired off in foster homes. They spent a week at the vets for tests & evaluation. (Why when I gave her a folder with complete records for their every vet visit??) They were adopted individually. They were fostered individually. They were adopted from the vet. To finally, an “I don’t know!” She was a *****. MAYBE there’s some chance she cares for animals, but she’s not right in the head for fucking sure! When she first took them, she promised I’d see them on her web site and she’d let me know where they were. That never happened. I have no idea what my poor babies went through. I’m SO afraid of them having been hurt or suffering in any way. I don’t even have the words to explain just how deeply I have always loved my girls and how much I need them in my life. I wanted to be buried with their ashes. I wanted all their paw prints tattooed on my when they passed. I only have Salem’s and Gypsy’s ashes who passed away in 2011 & 2012. I carry them around everywhere I go because I’ve been told a few times early on when I came here, that it’s illegal to have cremated ashes (of animal or human) in this state. So, over my dead fucking body! I will NOT let their ashes be taken from me! And I feel just as strongly about Sierra, Skye and Dusty, who were my special babies among the 7 cats me and my grandma had. I’d still kill a ************ for them. For over a year before my grandma passed away, I knew I’d be homeless, and I contacted at least 100 rescues and no-kills and sanctuaries across the country because I had the money to drive ANY FUCKING WHERE to save their lives! I could have driven them  to ANY FUCKING STATE even as fucking far as California if I had to! But NO ONE, NO ONE FUCKING STEPPED UP FOR THEM!!!!!! And only a FEW people ever retweeted their pictures that I’ve posted a thousand fucking times!!!!! 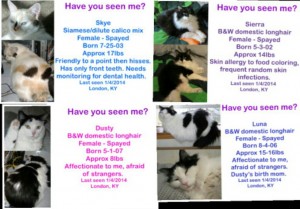 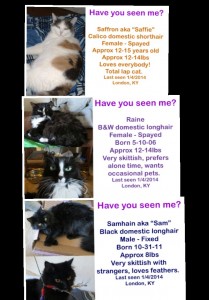 Once I got stable enough here where I am now, I did my research on her. Her “rescue” isn’t real. It has always been a home-based operation out of her trailer that the article says was condemned 2 years ago (so, sometime in 2013, before I met her on Jan 4, 2014.) and had no running water or electricity!! She once had about 6 women volunteering for her little home-based rescue operation, but one moved to NY, the other left for illness int he family or something, for whatever reason, one by one they left and it was just her the last I followed up on her. You see, I’m very good at finding out shit about a person. If you’ve touched the internet before, I’ll find your ass and know where you live. I’ve SEEN her trailer on google earth and from the outside it looked normal to me. I know it sits on a small hill/open land by itself and is not in a trailer park. I once had the addresses and phone numbers, maiden names, all info I could find on all the women that were once involved in her “rescue”, but I had my wallet stolen (again) when I came here, and the info was in there. Since those photos and names were removed from her website, there’d be no way I’d find them again not having their names to go off of. I’ve got all her texts on my old phone. Trust and believe, I was NEVER going to let this ***** go or give up on my babies!!

MAYBE there’s some off chance she just pawned my cats off on other people she knows like here, take this cat. But otherwise, I don’t have any fucking idea what happened to them. I’ve just thought that IF anyone had ANY of my cats, surely they would post a picture or two of my cat in their home online to show them off because my cats are absolutely GORGEOUS and every time I’ve taken them to the vet other customers there would always ask me what breed they were and/or if they’re a show cat or have won any competitions because they are so beautiful! I always thought that if they were alive, SOMEONE would have fucking seen pictures of them by now, pictures that aren’t mine!

And in other news, my friend, then guy that I like, I may never see him again. Unless the ‘job’ he got doesn’t work out and he quits. So, yeah, he got this shitty job delivering pizza but he’s not getting paid a fair wage. I don’t think it’ll even cover gas let alone insurance. He’s only going to get $3 per order and tips. It pains me because he’s worth so much more than that and doesn’t deserve to be treated like scum and worked that hard for what I think will end up losing money on the cost of gas alone. So yeah, he’ll really never have time for me with that job and all the cool, thin, “in” crowd friends he has to choose to hang out with.

Everything is JUST. SUCH. FUCKING. SHIT!

Oh, and I almost forgot. Of all things, my mom didn’t reply to tell me where she lives now (if she’s still in her house, if she took over my grandma’s house, had to get an apartment without her husband’s income or what???) for me to send her an xmas card, but she replied to me when I texted her around 6am to tell her about Stephanie getting arrested. In the end, she said I didn’t have to leave home and that “surely” something could have been done for my cats. But I’m still not so sure. Before now, my mom thought I was the scum of the earth. She wasn’t down to help me. Only severe circumstances brought her to talk to me, to accept me, and to realize I’m not the criminal scum she thought I was. Before, all she did was yell and scream at me and push her problems off onto me. When I was in OH, she texted me all kinds of shit, that basically she was pissed that I left and wasn’t there to take over everything when my grandma passed away. My mom had all legal power, it was her name on everything, not mine, but I just know if I had stayed, she’d probably have signed over her rights and made me power of attorney because I’ve always known her to be someone that can’t face the real shit when shit hits the fan. I may have “run away” but at least I tried to plan it out and I faced my problems head on. But anyway…. MAYBE, just maybe, if I had stayed in WV, MAYBE she would have helped me find a place for my cats. It would be harder though, when her husband was still alive, with him mouthing off against me to keep her riled up and mad at me. (Ugh, he never liked me, but I sure never wished death on him.) She sounds like a different person now, almost. I mean, she sounds like she cares in what capacity she’s able to, given her emotional problems, now that me and her sister are the only ones left alive (as far as I know my aunt’s alive…). … took losing her mother and her husband to consider me family. SIGH. But to make that long story short, I don’t hate my mom anymore, and I think we understand each other a little better than before my grandma passed. It was just, before, she was a raging, angry person towards me and I was afraid I was on my own and had no choice but to take life by the balls and tempt fate… Only I failed it for my cats…. :'(

why am i still here?

The gaslighter and the fool

Sounds like she is mentally ill. I was involved with a rescue similar to this one in the Dallas area, the woman was a breeder though. She was a hoarder breeder. But truthfully this is a mental illness, this level of hoarding. I’m sorry about your cats. You did what you thought was best, there is little you can do now except think warm thoughts about the time you were able to spend with your cats.

I still fear so much for them! They were living, pretty healthy, they have feelings, can feel pain, etc. I don’t want them to have ever suffered at all.

You could call and request an inventory to see if your cats are still there. Truthfully though I doubt they are still residing there. Chances are they were adopted out in some way. But it may give you some closure to find out if there as anything you can do.

No, I’ve tried getting the truth out of her. It’s been almost 2 years. She couldn’t tell me, weeks or 2 months later, the same story twice. All I wanted was to know where my babies went, because I would take them back if I’m ever stably housed. My oldest girls would be pretty old for a cat, and it scares me, even if they were fostered or adopted, if they would get the level of medical care they had with me, which was the best….

That is so unfathomably horrid that I can’t even imagine what it would be like to be in your shoes.
People.
I’m so sorry, friend. That’s heartbreaking.

Oh, I just found this: “The maximum penalty for second-degree animal cruelty is a year in jail and a $500 fine.” What a joke.

I know. I’ve always shook my fist at that.

People are really defending her. MAYBE she is passionate about animal rescue, but just went way too far off the deep end. She should have sought help when her volunteers were leaving and moving away. Hell, she should have done something when they condemned her trailer and cut her water and lights off.